I guess I’m wired backwards from the rest of humanity… for some reason, when the weather heats up, I start to think about baking.  Why???

Anyway, the kids’ trip to Calgary tomorrow has reminded me of the effort I went to last summer to obtain a living sourdough starter – something I had found impossible here in Toronto, but very easy at the bakery in Calgary, which had a nice sourdough herb olive bread and happily shared some starter with me.

A few months ago – quite a few; the jar said FEBRUARY ( :-o), I converted my runny pancake-batter sourdough to the Maggie Glezer “preferred” firm starter.  Firm starters are apparently more maintenance free (revive better; keep better), and are just as effective as a runny starter.  You only need to keep a little bit around and not much of it to start a new batch of dough.

So here’s what I found in my “stiff starter” bowl when I retrieved it from the downstairs fridge. 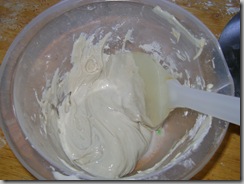 I should have frozen it – that’s what I would have done if I’d known I wouldn’t use it for SIX whole months.  But I found this post, where some commenters say to chuck the thing (after only 2 months!), while others say it’s worth a try.  And I find myself firmly planted on the “worth a try” side.  I will only waste a few days’ worth of flour and water on this experiment, and what have I got to lose???

(And I figure photo-documenting the whole thing will encourage whatever yeast is left in here to perform its heart out for the camera.)

Anyway, the starter wasn’t mouldy, which was a good sign.  It had a bit of “hooch” on top, but not much (probably because it was a fairly dry starter to begin with).  I poured off most of the hooch and stirred in the rest, thus completely side-stepping the “what to do with hooch” controversy (many say pour it off, others say mix it in; I do a bit of both!).

To start reviving the starter, I followed Maggie Glezer’s 15/30/50 refreshing formula and added 15g of the stirred VERY OLD starter to a clean container.  15g is not much; more of a SMEAR on the side of the container: 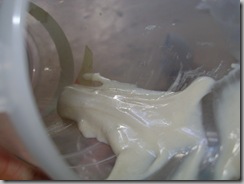 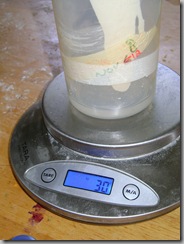 And 50g (okay, 51!) of unbleached flour – she calls for bread flour, but all I have is (Canadian) all-purpose: 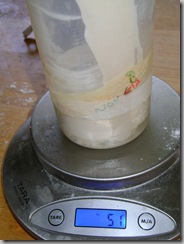 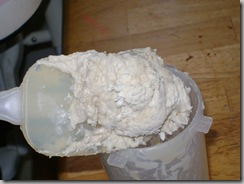 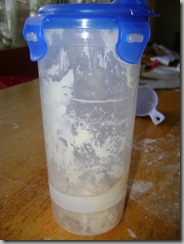