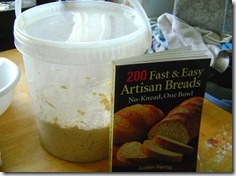 While we were in Ottawa a couple of weeks ago, I had a gift card and decided to bite the bullet and buy a no-knead bread book.

They had Artisan Bread in Five Minutes a Day, which, of course, I’ve raved about many times here. But I know there were tons of typos (hee hee – I typed “tongs of typos,” just to show you that no-one’s immune!) in the first edition of that book. Plus, they’re all so expensive. I’m no fun when I’m looking at prices of things in stores.

Finally, I compromised with this book, 200 Fast and Easy Artisan Breads, by Judith Fertig, which didn’t look like much fun, but has a lot of good, basic recipes.

Today, I used it for the first time to make the Caraway Rye Dough. I left out the Caraway seeds because I really dislike them, but otherwise made it exactly as written. The formula is very simple – basically, wheat flour, rye flour, water, yeast, salt, molasses. I did cut down the molasses slightly because Elisheva doesn’t like molasses – down to just over 1/4 cup instead of a full 1/3 of a cup.

Above, you can see it rising in my dough bucket. The bucket is overkill for a single recipe like this, but I plan to make pizza dough in the bucket tomorrow night and leave in a bit of the old dough for flavour. It was very nice in last week’s challah; it lent just a hint of more than the usual depth of flavour. (does that sentence even make sense? I am SO hot and tired and bedraggled; blogging from my air-conditioned bedroom on the laptop!)

Oops – formed and rose perfectly, but baked it too long. 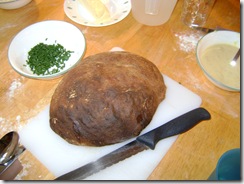 I was out at a kiddie birthday party and called Elisheva to preheat the oven, then called again to tell her to stick it in and time 45 minutes. I checked the recipe when I got home – it said 27-29.

The author (Judith Fertig) recommends two tools I don’t have yet: instant-read thermometer and dough whisk. Oh, okay, and a peel and baking stone. Gosh – all-told, I’m about $200 away from my ideal baking setup. Not to mention the closed cast-iron dutch oven everybody loves to bake Jim Lahey’s no-knead bread in (I think that’s the one). Wanty, wanty, wanty.

Anyway, “dark rye” though it was on the outside, the inside was still yummy, moist and delicious. Very hard to cut – is that an effect of the lower gluten from substituting 2 cups of rye flour for the usual wheat flour? I dunno. And once cut, the innards separated too easily from the (delicious) crust, making it hard to butter. 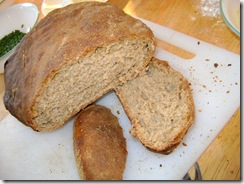 Still, this was easy bread, fast and delicious, and definitely one to consider for my next funfair bake sale. The pastries sold so much better than the breads – I guess nobody wanders through a park looking for bready treats. But the slices of beer bread were very well received, so I figure if I’m selling slices of fresh bread, rather than buns or loaves, probably somebody will take a couple. Especially if I have some nice soft butter available.

As for today’s batch, I still have about half the dough in the bucket downstairs. Maybe I’ll try making rye rolls tomorrow. In future, I’d bake for the recommended time, of course, and also try brushing it with a corn starch and water slurry that I’ve used before for rye breads to give the top a glossy, cracked appearance.

If you’re interested, you can read my full review of this book here. More recipes from it to come. Like I said, it’s not exactly the most exciting baking book – by far, it’s actually kind of dull. But the formulas look okay, and there is a nice range of flavours represented in the book.