Stirred it up last night in about five minutes in the bucket that had held the yummy rye dough.

Then, before we left for the farmers’ market today, I divided it into three – it was pretty thick – and spread it out labouriously into three tinfoil pizza pans.  Ted is much better at this than I am; he has a ton more patience.

I sprayed and covered the dough with plastic wrap simply because there are a few fruit flies around (not many, since the door is shut due to air conditioning), and as my baker sister will attest, there is nothing fruit flies love more than sourdough – or, in this case, bucket-raised hint-o-rye-sour Basic Artisan Dough.

(ugh – this book really makes me hate the word “artisan”) 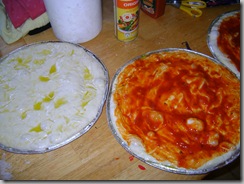 When we got home 2-3 hours later,  I pulled the plastic wrap off the well-risen, soft, bubbly rounds and brushed on a generous quantity of olive oil.  Yup, those are puddles of olive oil on the left dough round.  Then, sauce and cheese:  nothing else. 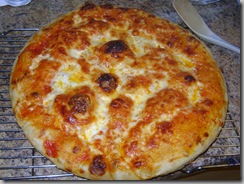 And yes, this IS fresh, Ontario corn on the cob!!!  First of the season… 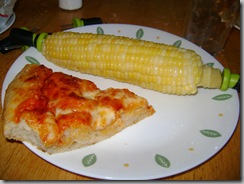 1)  Let it RISE!  So often, with pizza, since it’s supposed to be “flat,” we stretch it in a hurry, top it and bake without waiting at all.  Let it RISE.  What a difference!