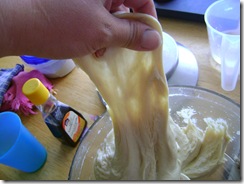 Being Canadian, I have never heard of Breadsmith.  Apparently, it’s a chain of artisan bakeries in the US which have many kosher locations.  Yay!  Nothing like that here, though.

Still, Maggie Glezer speaks fondly of their challah in her book, The Blessing of Bread, so I decided to tackle it.  In fact, she says it was so good she made an exception to her no-bakery-challah rule for the book.  I hope she’s right!  At least, the ratio of sugar to flour looked good (1/3 cup to 4 1/2 cups, which is about what I like; maybe a little sweeter than I like), and it’s not too eggy (one egg plus one tablespoon of beaten egg), which sounds good after months of pretty eggy challahs.

Funny:  I just came across this list of “You know you’re a true breadmaker when…” and one of the items on the list is “.... you think making a 4 hour yeasted bread instead of using your starter is ‘cheating’.”

Because that’s what I was thinking as I threw this together in the food processor.

Which, by the way, I have to say I love about Maggie Glezer’s recipes:  they are all scaled (and I do mean scaled, with proper weights in grams and ounces) to easily fit in a home mixer or food processor.

My food processor, being a 14-cup model rather than a 7-cup model, is great for mixing up recipes of this size.  Unfortunately, it’s not quite big enough to double.  It can only really hand recipes up to about 6 cups of flour.  More than that and it’s just too tough going.

The timing is a little different when you’re mixing in a food processor instead of a stand mixer.  For this recipe, Glezer recommends 5 minutes of initial slow mixing in a mixer, followed by 10 minutes at a medium speed.

While she acknowledges that this is a lot of mixing, which will heat up the dough and excite the yeast, this is altogether TOO much mixing if you’re using a food processor.  So experimentally, I mixed the recipe for 2 minutes and then checked the gluten development (that’s what I’m doing with the sheet of dough in the picture above).

Because the dough did get a little holey when stretched out, I then mixed it for an additional minute, before I decided that any longer would certainly either burn out my machine or kill the yeast with the heat.

So now I’m waiting for it to rise.  She says leave it an hour and a half, but it hadn’t really risen very well at that point… so I guess I’m also concerned that I have somehow messed up or killed the yeasts.

I have chunked the thing into a warm oven to rise, because it is actually fairly cool on the breezy table where it was rising.

And we shall see.