Another Rye – but is it ryelicious?

I didn’t realize it was just last week that I made rye bread last.  Anyway, so I made it again!

This is actually an attempt at the Artisan Bread in 5 no-knead Pumpernickel bread… but rhe colour is disappointingly light.  Without the cocoa the recipe calls for, and perhaps also without the caramel colour, it really looks just like rye bread.

It does seem to have more flavour than just ordinary rye bread.  There is a really almost boozy sour note to the smell and taste.  I’m not sure why because it’s not fermented longer, but it could be due to the burnt-sugar substitute for caramel colour.  Everybody noticed the distinctive presence of molasses… I’m not sure if that was a good thing or a bad thing, but it was surprising given that there are only 2 tbsp in the whole thing.

Anyway, I thought I’d show it off here anyway.  Will probably make again because of the complex interesting flavour.  I wouldn’t necessarily call it “ryelicious” like last week’s, but it’s decent eatin’ with lots of potential.

Ted says “I think it needed a stronger body of taste to it… the molasses needed something.”  Drat.  I really only made it because he likes pumpernickel so much, and there isn’t much you can do to create authentic pumpernickel in a home kitchen.

You can see how easy it was to make, anyway:

1)  Mix up dough, stir it around a bit in the bowl.  Let sit overnight, fridge all day. 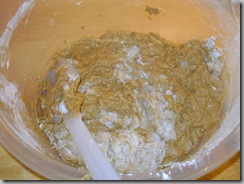 2) Form loaf mid-afternoon.  Let rise for a while.  Bake. 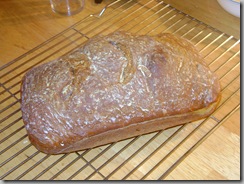 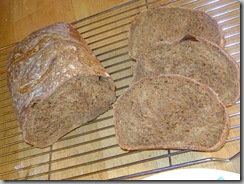 Maybe I’ll work on “darkening” last week’s rye rather than bothering to try to fix this recipe.  Maybe include the cocoa but leave out the molasses…?

Anyway, not a flop, but not a rave either.