Focaccia and Ciabatta – two days from one dough!

Inspired by Matt, husband of Kath Eats, at  her blog, I attempted to follow his formula for Focaccia and Ciabatta.  He adapted these from a single ciabatta recipe out of Bread:  A Baker’s Book, by Jeffrey Hamelman, which is probably the #1 “Bread Book I Would Love to Own if I Had $50 Hanging About Doing Nothing.”

I definitely like how, after the poolish stage, he splits the dough into small enough batches (1/3 for the ciabatta, 2/3 for the focaccia) that I could run them individually through my food processor.  No hand kneading!  My hands are still tired from last week’s challah.

No idea why, but I didn’t have quite the amount of poolish as I should have.  Maybe lost some against the sides of the bowl?  I mean, I weighed everything going in, so… .it’s a mystery.

Anyway, the two doughs turned out beautifully, but were not exactly the “pancake batter” consistency he describes in his blog entry.  I used all-purpose flour, not bread flour, but that shouldn’t have made the bread more gluten-y, which I think it was.

When the food processor was finished, each batch was fairly shiny, with what I’d consider a well-chewed chewing-gum consistency.  Not exactly pourable, but lots of strengh; it felt nice and smooth.

Here’s one of the batches (focaccia?), after the first rise: 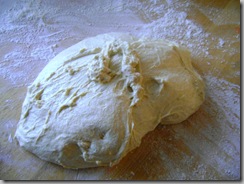 And after the first folding: 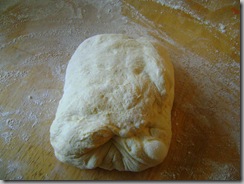 Gloppy, but it worked.  Here are both doughs resting in bowls after their first fold.  Yes, the bigger dough is in the smaller bowl and vice versa. 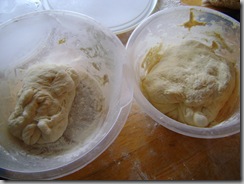 This is a fun one:  three fermentations going on simultaneously above the microwave, above the fridge.  Bottom:  ciabatta, middle:  focaccia, top:  sourdough starter that I am reviving to use later on this week. 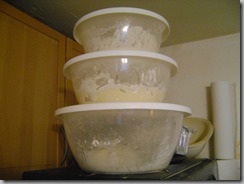 Okay, I admit, I miscalculated and by the time I started yesterday, I knew I wouldn’t have time for the full final rise (eek).  I allotted twenty minutes between stretching instead of half an hour as Matt says to do… and I think these turned out okay. 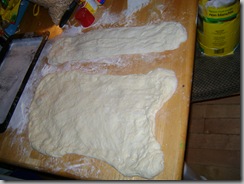 The focaccia distorted pretty early on and was really too soft to do much with.  The final product definitely suffered, as you will see.

With the oven preheated, the ciabatta went flop onto the pan and into the oven. 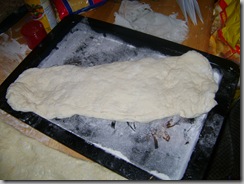 …emerging 25 minutes later a deep, rich brown, almost burnt but not quite and as LIGHT as a feather.  Wow!  I was very impressed, and surprised by the weight. 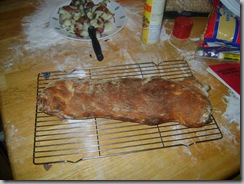 I had to go out to an event at our shul, but I told Ted to take pictures when they opened the bread:  hopefully, I’ll post them at a later time.

So ultimately I didn’t even get to taste the ciabatta, but Elisheva assured me it turned out just the way I wanted:  more air than bread.  What I saw of it looked perfect, but I was so stuffed by the time I got home that I didn’t feel like washing just so I could try a piece.  What a letdown.

Oh, yeah, so the focaccia… further to Matt’s suggestion in an email, I tossed the thing, fully risen, onto a pan, sprayed it with Pam, and threw it in the fridge overnight.

This afternoon when we came home exhausted and ready to eat, I just preheated the oven and brought the focaccia back to room temperature while that was happening.

Then, sprinkled it with dried (gasp!) rosemary – I suspect that my real rosemary topiaries are too infested with aphids to eat – and tossed it in the oven.  25 minutes later… 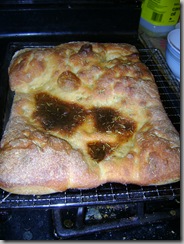 Okay, you can see that the bits that got distorted and thinned out too much basically baked into soda crackers.  Yummy, but crackers.  The parts that actually baked up into bread were a real experience. 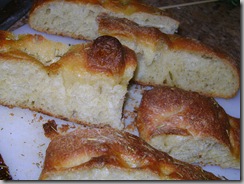 Cornmeal definitely makes this a very hearty bread.  I think I expected a little more of a sour “zing” after an overnight poolish contributing to basically two days of fermentation.  I think I was also hoping for more of the bubbliness of the ciabatta.

But, of course, you’re never going to get that with all the cornmeal in this dough.  I love corn, and I love cornbread… is it fair – when I put the corn in there in the first place – to say I was a bit disappointed by the frank corniness of this focaccia?

It WAS incredibly tasty.  And I did make mistakes, dumb mistakes, including the uneven shape of the bread… oh, and accidentally leaving out the rosemary and olive oil from the dough (sprinkling it on top just isn’t the same).

Mistakes that probably warrant doing the whole thing over just to see if I can’t get it a teeny bit closer to perfection.

All of which said, I think cornmeal is a lot like semolina, which I finally managed to buy the other day.  This bread has gotten me wondering once again about all the wonderfully authentic Italian possibilities inherent in semolina bread.

However, before I go the poolish-and-two-days route again, I may just see what the Artisan Bread in Five folks have to say about semolina.  Quick and dirty.

OR… maybe semolina bread is the perfect application for the sourdough still lurking atop my fridge!