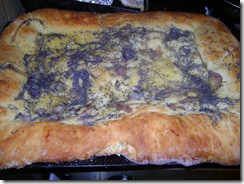 Well, I don’t know exactly what I mean by that title, but on Monday, I decided to make the yummy Artisan Bread in Five Minutes pletzl again (here’s the original recipe).

One, last time I used the book’s basic Boule recipe; this time, I used the challah dough – as suggested in the pletzl recipe! I have no idea why, but there was way more dough, far too much to fit on my little cookie-sheet pan… ugh.

(in hindsight, I should have used 3/4 of the dough and saved 1/4 for another time. That thought honestly never occurred to me until just now. But hindsight is 20/20, and at the time…well, I didn’t!)

And TWO, for some reason, I totally skimped on the onion! I must have used two last time, because when I dumped them onto the dough, they were only able to spread out in the most skimpy way. Ew… who wants an onion bun with not enough onions?

So what I learned is that challah is NOT the right dough for pletzl!

The challah recipe is rich and cakey, with eggs, oil and honey, where the boule dough is plain and bready. It is my definite opinion that when crafting a bread so elaborately decorated with flavourful onions and drizzled with oil, as simple as possible is what you want from your dough.

Speaking of oil: I must have been sleeping or dreaming of Naples when I drizzled this with olive oil instead of canola, like last time. On an Italian bread, that would work (though not in combination with this rich dough!). On Ashkenazi bread, well, just plain weird.

Anyway, everybody seemed to enjoy their puffy, crusty, low-oniony pletzl well enough. I served it with roasted-red-pepper and black bean soup. That was it for supper.

(did I mention I dumped the poppy seeds on a little randomly and over-generously? sigh… it was Monday; I was not at my best…)

Lessons have definitely been learned from yet another bread mishap. I will definitely make this bread again… just maybe not on a Monday! 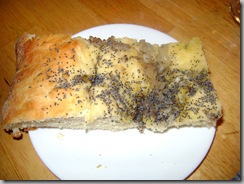