One more time for POTATO bread!

And this time, as they say in the world of sports, she shoots… she scores!  A perfect Artisan Bread in Five potato bread (originally borrowed from this web recipe) on the, um, eighth try?

Ha ha.  Maybe more like third.  (read about my last disaster with this bread)

Still.  This bread has the potential for being an all-time favourite, so I figure it’s worth the effort.

So:  no garlic this time; I may throw some in next time.  Not as flavourful without it.  Also not as flavourful because I fridged it for a few hours, then baked it the same day I mixed.  I still have about 2/3 of the mixture in the fridge, which I plan to bake up for tomorrow morning, so I can see if the flavour improves with time.

Also… (don’t tell!)  I used instant mashed potato flakes.  Just boiled up water and mixed them in a bowl, let it cool off, and added it to the recipe.  Easy; not as authentic, and also probably way more moist than if I’d baked the potato, which gets a lot of the water out.

I used about 2lb of the dough, so bigger than a grapefruit or a canteloupe, the standard sizes the authors suggest, but it was a good size for the pan, and for our family.

So here it is unbaked:  what a wet blob this was, coming out of the fridge after only a few hours.  Even with floured dough, floured hands, I still couldn’t get a good grip to turn it into a nice, neat ball, so it’s a little ripped and messy looking. 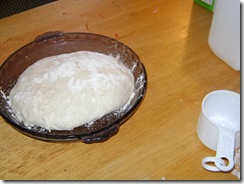 But it rose okay.  I did NOTHING to the oven except throw it in, because the baby was waking up, and it was either steam or baby, so I chose the baby.  I’ve eaten lots of non-crisp crusts in my day; I figured one more couldn’t hurt. 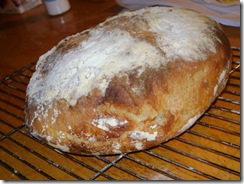 And here’s the inside.  Hard to cut when soft and fresh, but ever so moist (but not overly wet inside!) and yummy. 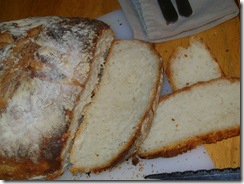 We had this last night with creamy Broccoli soup and a very by-the-books tuna casserole.  I actually had to miss supper for PTA at Elisheva’s school and only had it later after the bread had cooled down.  It was still amazingly yummy!