Starting with one batch of no-knead Artisan Bread in Five Minutes challah dough, here are start-to-finish pictures of yesterday’s amazing Nutella-stuffed sufganiyot (the Hebrew word for the traditional jelly donuts eaten at Chanukah, but I’m not sure if that’s the word for donuts in general, or just these particular ones, or just jelly donuts… so many questions!)

The basic recipe is here, but I made it with two variations this time.

First, I omitted one of the four eggs.  I have been doing this every time because I find the dough much easier to handle if it’s on the dry side.  Second, I made it with BUTTER instead of oil as I usually do for Shabbos.

Our Shabbos bread usually has to be pareve (non-meat, non-dairy), but since I was planning to use Nutella in these anyway (Nutella is made with milk), I figured a little extra dairy couldn’t hurt.

Here’s the dough after its initial stir.  I didn’t have to take it out of the bowl, but you can see that it’s dry for a no-knead dough.  It’s partly the butter’s fault.  Our house is quite cool, which is great for working with pastry in general, but it meant the butter probably started congealing right away after I added it. 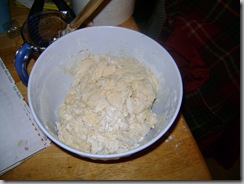 Here’s the dough the following day just before forming.  It hasn’t risen much – unlike the Shabbos challah dough, which pretty much overflows the bowl overnight in the fridge.  Again, I think that’s mostly because of the butter:  it can’t flow. 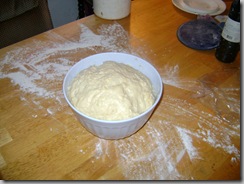 Divide carefully – I actually used a scale! – to portion 24 donuts, from the entire recipe of dough.  Roll each portion, flatten with rolling pin (okay, you got me – a wine bottle), fill.  Brush edges with a bit of water and seal well. 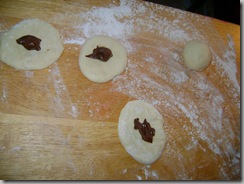 Rest on seam and allow to rise 20-40 minutes.  Here are all 24 ballies, lined up in the order I made them, to ensure that they all got a nice long proof. 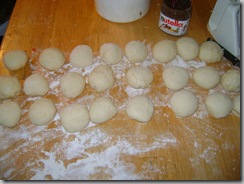 Now fry!  I couldn’t take pictures of this step because I was hurrying, but it was beautiful except the oil got darker and darker with each batch (I only did four at a time because I usually overcrowd deep-fried things, with bad results). 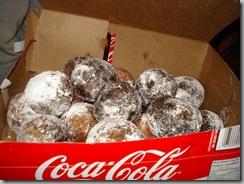 (Yes, I transported them to my mother’s house and graciously presented them in a cut-open Coke box)

The final few batches were so dark, they actually looked like they’d been made with chocolate dough… which actually…wouldn’t be a bad idea, now that I’m thinking about it.

I haven’t made the pain au chocolat again because it wasn’t really sweet enough for my or my family’s taste.  If something looks like chocolate, we just inherently want it to taste sweet.

BUT the point of donuts is that they are not, themselves, sweet.  They are deep-fried and coated in a slight sweetness, but what you are tasting is basically fried dough; it all comes down to the flavour of the dough itself.

I found these absolutely yummy with the pure-butter challah dough (what’s not to love about blobs of fried challah?).  But a chocolate dough that was NOT sweet, coated lightly in icing sugar… well, that might be just the thing to cap off our Chanukah experience next Shabbos!

By the way, I generally dislike day-old donuts, but I decided to have one of these with my coffee (there were lots left over and I didn’t want them to go to waste) and it’s actually quite nice.

I like that the chocolate is still soft in the centre (when I made them for Shabbos with squares of chocolate, it solidified again when it cooled off).  It’s basically toast with Nutella, a perennial favourite.  Mmm…