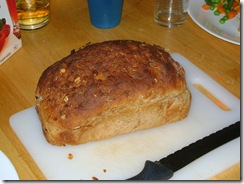 Sadly, not a rave.

I don’t love dried fruit and I guess was hoping this homemade granola and the accompanying granola bread (both from Artisan Bread in Five, which went back to the library yesterday) (an “adapted” version of the recipe is here if you’re interested; it looks the same as the original to me) for which it was made would somehow transcend all of that and make me love it. It didn’t. (if you followed the sentiment despite all the parentheses) (don’t bother).

The bread was good. So good I gave half a loaf, hot n’ fresh, to my sister. But Ted talked me into using dried cherries in the granola; they were too big and weird. And I guess I’m just not a “bits and pieces” gal. 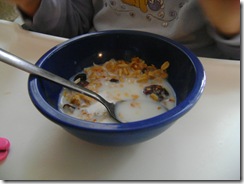 he granola did get rave reviews. (the online recipe is slightly different; it includes sunflower seeds, which the book’s recipe does not)

Naomi couldn’t get over the fact that I actually made cereal! And after years of aspiring to “crunchy-granola” status, I can finally remove the quotation marks.

I didn’t try it in milk, but it did taste lovely as a snack; very much fresher than store-bought granola. Probably less sugar and fat, too. (But, in a whisper: but… I love Quaker Harvest Crunch because it is SO sweet and I love the way it clumps in the bowl.)

The day I made this, the littles ate granola for breakfast, granola bread for lunch… and again for supper. Without a single complaint!

The bread itself was pretty much enjoyed by everybody (okay, Elisheva complained a bit; don’t remember about what). I subbed whole-grain spelt for the 1.5 cups of whole-wheat. I suspect Ted kind of believes everything that tastes cinnamony is a little bit good for you; this bread is definitely more up his alley than mine.

Here’s what it looked like inside: a perfectly-risen loaf. The book mentions a granola topping, so I sort of threw some granola at it before it went in the oven. Naturally, it didn’t really stick (though a few raisins puffed up & burnt - blah). 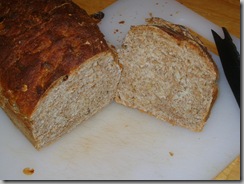 This site (where the recipe is also posted) says the book mentions the granola topping but doesn’t say what to do with it. Apparently that’s just one of many “too-late-it’s-already-printed” errors in the print version of the book. Anyway, the solution I could have figured out if it wasn’t 7 am when I baked this is: EGG WASH. Doh!

The bread’s colour looks a little ripply in the photo, but I promise it wasn’t that glaring in real life. There may have been a few “patches” of white and patches of spelt (I was tired when I was stirring it together, so didn’t premix the dry stuff like a good girl) but they weren’t visible in normal light and it didn’t affect the flavour or texture.

In conclusion! I might make the granola again; I might make granola bread again, without the fruity stuff. But maybe not… I can’t see that the nice “roasted” flavour from the granola added much that a bit of maple syrup and vanilla in a regular oat-bread dough couldn’t – a little more easily.