Sorry, couldn’t talk, my mouth was full of yermy bergel.

My sister the baker gave me a biiiig bag of “professional” malt powder, and so the first thing that came to mind was:  bagels!  I have made them before several times, and actually quite like the soft pretzel recipe I used last time (I have made it as pretzels as well).  VERY easy.

But I wanted to try a “real” bagel recipe and, having already returned Bread:  A Bakers Book to the library, I had to rip one off from the Internet.  In this case, the recipe from The Bread Baker's Apprentice: Mastering the Art of Extraordinary Bread (BBA), by Peter Reinhart, which can be found, slightly modified, at this site.

Here I am, ripping off  the recipe from the Internet! 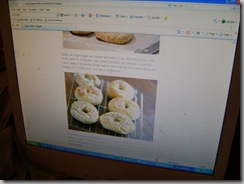 What I didn’t take pictures of:  sponge, main dough, kneading, ball phase, weighing (yay, my mother gave me a scale that works great and confirmed the fact that my portioning-by-feel is actually pretty accurate).

So here we are all the way at the rising-on-the-pan phase.  I think this was after they came out of the fridge.  I didn’t fridge-retard them overnight like the recipe says; I only did it about three hours – from about 10 a.m. ‘till maybe 1 p.m.

(I’m leery of recipes that tell you to do things “overnight!”  Think about it.  On a busy winter Thursday night when we do a lot of Shabbos prep and laundry, “overnight” for me can sometimes be as little as four hours; is that long enough?  I would much rather be told “six hours” or “ten hours” and then let me figure out when to fit the rise into my own schedule…I’m a grownup, I think I can handle it.)

Anyway, skip a bunch of steps and here they are, ready for boiling, in malty, soda-y water. 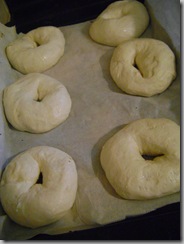 The recipe isn’t too specific about how long to boil them for, so I just did about a minute and a half, flipping a couple of times along the way.

And then dipping in poppy seeds:  I used an entire package!  And even then, it wasn’t quite enough to cover every single one.

So, nu?  The bagels?  Judge for yourself: 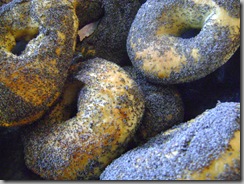 Mmmmmm… oh; what, you can’t taste them?  Then you will have to trust me, and the members of my family who consider themselves bagel connoisseurs, that these are indeed some migh-T-fine bagels.

I was REALLY worried because from a couple of sites it sounded like the BBA bagels might be too much on the fluffy side.  They were not.  There was a perfect chewiness to the crust; just right.  The inside had some fluff to it but not nearly as much as the abominations that Toronto bakers and bakeries (even the Jewish ones) choose to pass off as a bagel.

I would like to say starting with a sponge gave these bagels more depth of flavour than the quickie-fakie bagels made with the Recipezaar pretzel recipe.  But to do so would be unwarrantedly pretentious.  They were yummy, but I couldn’t necessarily detect more flavour than the pretzels, which, incidentally, are sweetened with brown sugar, which gives a reasonably interesting note to their chewy sweetness.

Anyway, here’s the inside of the bagels: 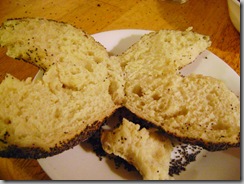 It would be interesting to see how these age over the next couple fo days, but as with any fresh-baked product in this household, that particular experiment will have to wait a few years until the bread-starved kiddies are up and out.  With supper over, there are maybe four or five left.  By tomorrow, they will all be gone.

Every time I get a foodie impulse, like the time I made different soups every night for several weeks, the family starts to take it for granted.  Elisheva has lately started to say things like, “why do we always have to have bread?”

My answer:  “You don’t have to have any.”  But somehow, she always sneaks a piece.  Tonight’s bagels were no exception; she had one before drama class, and begged me to bring another one back for her when I came to pick her up.

This recipe is definitely one to make again… or maybe I’ll try the easy ones next time and see if any of these swine (aka my family) can tell which pearls are which.

Oh, and here’s my penance for ripping off the recipe, which I won’t reproduce here… a legitimate link where you can legitimately buy a genuine copy of the BBA book should you be moved to do so: