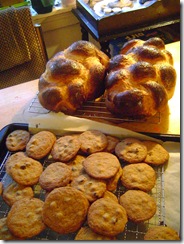 Okay, so I have adapted the basic Artisan Bread in Five Minutes a Day no-knead sweet dough recipe, and I think I have it just about perfect.

The recipe has been tending to come out too sloppy to braid nicely, so I tried two fixes:

~ Cut the eggs from four to three (I could have cut the water, but the truth is, I don’t love really eggy challah anyway)

I also gave it a longer first rise than usual.  I mixed it up Thursday night (I wouldn’t call it kneading, but it did require some fairly vigourous stirring by hand) and let it sit at room temperature for two hours.

So, in short:  it made a WORLD of difference!

The dough was amazing!  I barely needed flour on the table to roll out the snakes and start braiding.  It rolled out beautifully, just a touch on the “too-sticky” side.

And then, given past experience with no-knead breads that come out with a blob of raw in the middle, I baked it longer than I wanted to.

I bake my usual challah recipe (which makes a smaller, dryer, loaf), about half an hour at 350°.

So I was inclined to bake these for 40 minutes, BUT left them at least five minutes beyond when  the timer went off.  Finally, it was almost Shabbos, plus Ted had a pumpkin pie that needed to go in, so I reluctantly hauled out the challahs.  They were AMAZING! 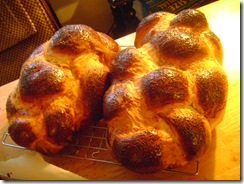 (Yes, they look dark in the picture… but they were just right in person.  And I was confident enough to decorate them - with poppy seeds in this case - which I don’t do with a recipe I’m not committing to) 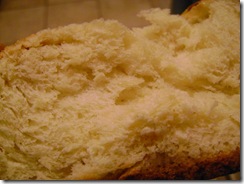 Well, here’s a piece that was left over.  It looks small and squishy, but that’s just because someone ripped off the top and ate it already.

Let’s just say I’m very, VERY pleased with the result of this particular experiment!  What a wonderful way to start another week in bread.

(p.s.  The chocolate-chip cookies in the top picture turned out delicious, as well…!)