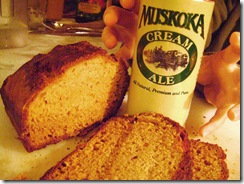 I had YM make this Beer Bread not just out of laziness, but also to show him how super-easy it is to make quick bread.

I have made this several times before, but this time, I forgot that several reviewers warned NOT to let this bake the entire one hour stated in the recipe.

Sure enough… I realized it just as I opened up the oven; overdone.  Ugh.

Also, it turned out when we bit into the overbrown bread – he forgot to put in the salt.  And was… well, how do I say it?  A little overgenerous with the baking soda.

So the bread was fizzy and sour and generally not as pleasant as the last time I made this recipe.  It’s a reliable recipe, but the moral here is that you can’t count on a 15-year-old boy to include ALL four ingredients!!!

Hey… I just looked at the recipe again and realized it calls for baking powder.  He definitely put in baking soda.  Sigh.  Moral #2:  Can’t count on a gifted 15-year-old to read the labels on the above-mentioned four ingredients.

However:  two lessons learned, even from an unsuccessful bread!

One – overbaking definitely brought out a nice maltiness from the beer in the bread.  Might be worth doing on purpose sometimes…

Two – in order to make this pareve, for a meat meal, I used canola oil instead of the butter on top of this bread.  I also cut down the quantity; I drizzled it on, probably less than 1/4 cup.  The texture was quite lovely and crispy:  very nice, even in pareve form!  Of course, the buttery flavour is nice when you do use butter, but if you want to leave it out, canola oil is more than acceptable.

So there!  I am so full from eating this yummy bread, even with its booboos… for once, I don’t want to think about making, baking or eating bread right about now!