A (chocolate) bread to blog by

Blogging here, my kids barely not screaming in the background, and relaxing with a cup of coffee and this pain au chocolat from the Artisan Bread in Five website, spread with plain butter: 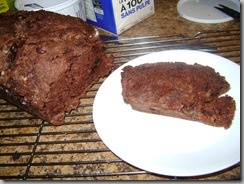 I forgot to put sugar on top of the pain before I baked it – probably because it was 6:45 in the morning.  I had dreams of breakfasting on this bread, which is made with lots of butter, cocoa, chocolate, chocolate chips and more yummy stuff.

I will warn you – though it looks like it (sorry for all the brown against the brown countertop in the photo!) this is a “sophisticated” grown-up chocolate bread; the little kiddies (2 and 4) didn’t like it much for their breakfast.

I actually ran out of eggs; I only had three in the house (three out of four that the recipe calls for) while mixing it (Ted came home a little while later, so I had more eggs to mix up tomorrow’s no-knead challah).  The recipe has a lot of moisture in it, however, and doesn’t seem to have suffered for the lack.

Would I make this again?

The recipe is more potchkedik than most of the no-knead recipes, what with melting stuff for the ganache and the many different add-ins.

I also felt it took way more mixing than a “no-knead” recipe legitimately should.  It was hard to stir, definitely on the stiff side, and I don’t think one more egg would have helped much.  And it needed quite a lot of forceful stirring, as I was trying to avoid having pockets of whiteness.

(It would probably have saved time to mix the cocoa with the flour ahead of time, thus distributing the colours evenly from the start)

For next time?  While I’m taking out the butter, cocoa, and all the rest, I might just be tempted to make a coffee cake – not quite as sweet as full-on cake, but a couple of notches up from bread.

Then again (nibble, nibble… it really is quite a nice flavour), maybe I will give it another chance, using all the eggs, premixing the dry stuff, and adding a sweeter topping.