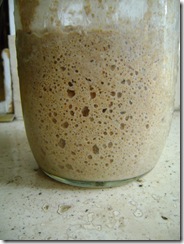 As a special treat to go with the sliced meats we were planning for Shabbos lunch, I decided to use the all-rye sourdough I’ve been building all week.

I mean, it was so happy and bubbly and READY, and I couldn’t just stick it in the fridge without baking it up.  How heartless would that have been???

(I started this sourdough from scratch last Saturday night.  Here’s an earlier picture.  And another.)

I used the 40% Caraway Rye on Page 194 of  Bread: A Baker's Book of Techniques and Recipes (B:ABB), which I’ve been testing out all week.  I did, however, omit the caraway because I am probably the only Jewish person who doesn’t enjoy “kimmel” in her rye.

As when I made the book’s Vermont Sourdough earlier this week, I was astonished that the recipe only calls for 2 Tbsp of the original, mature starter.  However, the Caraway Rye does offer a bit of a cheat in the form of a teaspoon of commercial yeast added to the final mix.  Not sure why it’s necessary, except perhaps for increasing the speed of the final ferment.

Anyway, the initial overnight rise used just the 2 Tbsp of my starter and performed wonderfully.  I was getting anxious about Shabbos coming, so didn’t leave it for quite the 14-16 hours B:ABB recommends.  Nevertheless, it was very active by the time I did the final mix.

Here are the two loaves.  I tried to make one pointier on the ends, but the other one, I just left as an oval: 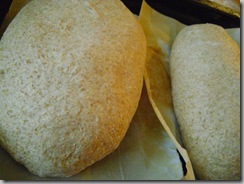 I forgot to take a picture after slashing the loaves, so here I’ve snuck a peek in the oven when I opened it to spray (For all artisan-style breads, I have been spraying every 2 minutes of the first ten.  There’s also a pan of ice cubes next to the bread, and a pan of very hot water directly underneath.) 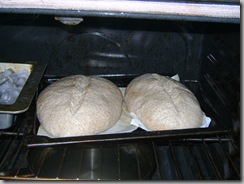 And here are the finished loaves.  Slightly overdone on the top and sides… next time, I’ll probably do five or even ten minutes less. 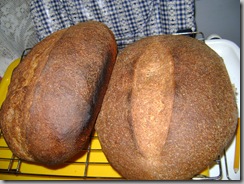 Here’s the final “crumb” of the bread.  Quite dense, and yes, a few white streaks where I was unsuccessful in incorporating the rye sourdough with the all-white final dough. 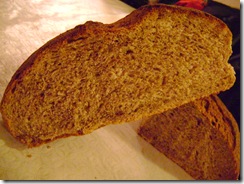 The taste was quite lovely.  I think it might need a little more salt next time; this recipe calls for only 1 Tbsp, which seems a little low.  For me, salt helps bring out the flavour of the sourness in the dough.  Which was faint but distinctively present.

Given the strong (but tasty) rye flavour of this bread, I don’t know if I need to try the higher-percentage rye recipes later on in B:ABB’s rye chapter.  My mother’s comment:  “this would be good with some butter.”  (we were eating a meat meal at the time)

Ted also seemed to enjoy it.  His tastes definitely run towards dark, dark, rye breads, the denser and nastier, the better.

So… definitely one to make again.  Once we have used up the two loaves we currently have sitting around!

Oh – but the sliced-meat sandwiches I was dreaming of?  In my sleepy delirium, I also planned turkey puff pastries for Shabbos lunch.  And in Ted’s sleepy delirium (we sleep quite close to each other in the same screaming-baby middle-of-the-night household), he only bought one package of one kind of meat.

In our joint sleepy delirium on Friday, we stuck all the turkey into puff pastries, baked them up and forgot all about it… until Friday night when we realized there would be no deli sandwiches for Shabbos lunch.

Hey!  I just thought of something!  Why don’t we all have deli sandwiches for tomorrow night’s supper???  In fact, B:ABB suggests that with rye breads (though mostly high-percentage rye breads), you must let the bread rest for at least 24 hours before eating, to allow the flavours to fully develop.

So there.  Tomorrow night, we will eat the fully-developed rye bread, piled high with meat, meat, MEAT:  a celebration of CARNAGE!