Mmm, mmm, mmm… tonight we had the John Barrymore Onion Pletzel  from page 185 of Artisan Bread in Five Minutes a Day.  No, I didn’t lie, and didn’t end up buying the book, but many of the recipes are available online.

I actually had a hankering for focaccia today, and was thinking about a tomato-onion motif, but started thinking more and more about just the onions.  Eventually, a bout of Googling brought me full circle to this recipe.

I do love pletzl, when it’s made right, and this recipe is definitely the way to make it right.

For this one, I mixed up the master no-knead dough (I found it here, but there are numerous sources) last night and let it sit for a few hours before fridging it.

Here it is, first mixed: 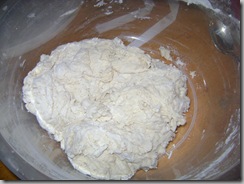 I was surprised it was so dry, but it sure got moist and blobby-looking in the fridge overnight.  But despite its moist appearance, when I took it out and floured it up lightly this afternoon, it actually behaved really well and rolled out without much problem: 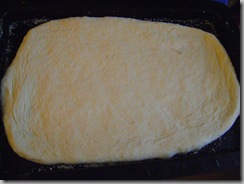 (I was surprised it was so well-behaved because my previous no-knead bread attempts – successes! - used a much richer challah recipe which was decidedly moister)

While it rose, I lightly caramelized the onions.  I used half of a big purple onion.  And I have a new way of caramelizing them:  fry until translucent in a mix of olive and canola (you can use all olive, but I didn’t want too much olive oil taste), then add a cup or more of water.  Simmer on medium until the water is gone; add water a second time for extra-tender onions.  Finally, once the water is mostly gone, stir the onions until they are almost dry and starting to brown a little.  You don’t want them all the way brown for this recipe, or the baking will turn them into char.

With the purple onions, it was hard to tell if they were turning brown, but I decided this was done enough.  (Elisheva:  “ew, Mommy; nobody’s going to want to look at that - those look exactly like worms in that picture!”) 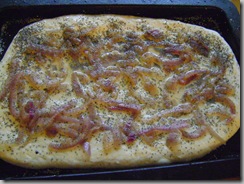 I drizzled it with more oil – canola, again, didn’t want a strong taste, and probably used more than I should have, but mmm, it was yummier for the extravagance!

The bake took way longer at 350° than the recipe suggested.  Like maybe 15-20 minutes more, almost doubling the time.  I didn’t think I made it too thick, but I might try a bit thinner next time (though in that case I don’t have a baking pan big enough!).

I had to run out, so I made Ted lift it up from the pan to check the bottom until it was done.  (I used white grits underneath so it wouldn’t stick… they really give the best, crunchiest texture!).

And finally, here it was – the best most amazingest pletzl ever. 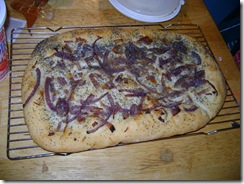 Kind of like the one at the Rideau Bakery in Ottawa, only fresher, breadier.  Mmm… Here’s a close-up! 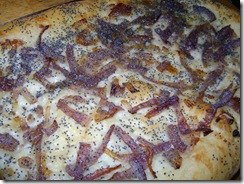 And here it is plated alongside oven-roasted ratatouille (a fancy way of saying veggies tossed up in a roasting pan), with broccoli soup on the side. 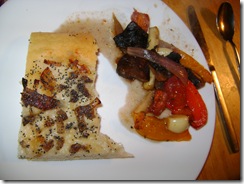 And the taste?  Tremendous crunch on the outside; almost-tough bottom crust while the inside was hole-y and tremendous like the artisan bread the book promises.  I really, really wish I’d liked the look and feel of the book more, because the recipes themselves are so great!  (2 tried so far, including the challah)

So in conclusion, we’re living like kings!  It’s easy when you start with amazing fresh bread…