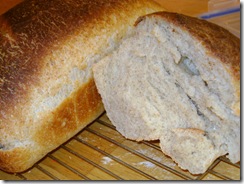 Well, this isn’t the QUICKEST bread around, but it surely must be some of the most delicious.

Yes – it is sourdough success!  Once again!

This is the Vermont Sourdough from 153 of Bread: A Baker's Book of Techniques and Recipes (B:ABB) (see previous posts for background and other recipes I’m trying this week as I hop back up on the bread wagon big time after weeks of relative breadlessness).

So.  How long, exactly, for delicious Vermont-style Sourdough (only Vermont-style because my starter lives here with me, in Toronto!).

Let’s see… well, weeks to cultivate the starter to begin with.  We won’t count that!

Saturday:  Took “Starter A” out of fridge after Shabbos to wake it up after a relatively long doze.  (I have two batches of my main starter and I’m trying to alternate which one I use so they both stay as fresh and active as possible).  Fed once.  (5 minutes)

Tuesday:  Fed Starter A once in the morning.  (5 minutes)

At night, when it was good and bubbly, I took out a few Tbsps to use in creating the levain (liquidy preferment) for the sourdough bread.  Most recipes call for half a cup or more of starter… I was amazed that so little could have any leavening power whatsoever.   Returned the rest to the fridge.  (10 minutes to make the levain)

Wednesday:  Around noon, create the “autolyse” phase of the dough (essentially, a salt-less, loose preliminary mixture) using the levain plus more flour and water (many sourdough recipes use the levain as the only liquid).   Let stand 20 minutes.  (5 minutes to mix)

Add salt and a bit more flour, knead 5 minutes by hand (nothing this big will fit in my food processor and I don’t have a stand mixer.  Yet!  (10 minutes’ active work altogether)

Let stand, covered with plastic, for 2 1/2 hour “bulk fermentation” process.  Ideally, fold twice, but I only folded once. (5 minutes to take out, fold, put away again)

And it worked!  Here’s what it looked like after two hours.  I have never had such a beautiful final rise with sourdough before.  All from a few tablespoons of my very own starter; no commercial yeast.  I was shocked! 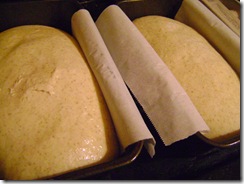 Here, I’ve used the scissors-slash technique shown in B:ABB, which I really love because it’s quick and feels way cool to stab the loaves before they go in. 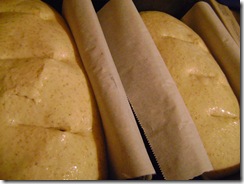 Finally, there’s a 45-minute bake in a very, VERY hot oven (460 degrees).  A presteamed oven, with spraying every 2 minutes of the first ten minutes.  (10 minutes to prepare oven and spray)

And then a bit of time to let the bread cool down, though as you can see from the picture at the top of the page, nobody waited.  It looks like weasels have torn the loaf up with their claws.

The family said the bread was very good.  And for how long it took, it had better be!

For a loaf of quite, QUITE good bread.  The trade-off of the smallish amount of sourdough is that the bread didn’t taste very sour.  On the other hand, I don’t think I really like it all that tangy.  There must be something in the middle, where the bread has a good, strong flavour… but isn’t unpleasantly sour.

Anyway, B:ABB may be many things, but it is not a bread book for those who like to leave their bread alone to do its own thing.  The author doesn’t seem to trust that good bread will just happen, as so many do.  I’m not sure exactly where I stand on this.  I do think if you put in effort, you get returns, but the returns probably diminish at some point.

I may be more of an Artisan Bread in Five Minutes a Day kind of baker than a B:ABB kind of baker.  That’s all I’m saying.