Not to be confused with Rustic Bread, a few pages later in Bread: A Baker's Book of Techniques and Recipes (B:ABB), the bread book that I’m using to get a kick-start into baking again.  I chose it pretty much at random due to its being comprehensive and friendly-looking on the shelf in the library.

To begin (well, continued from last night) … Happy Poolish!   Rested overnight and turned out nice and bubbly.  Amazing, considering there’s just a couple of pinches of yeast (he said to just use a few grains, but I just couldn’t) 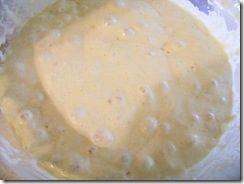 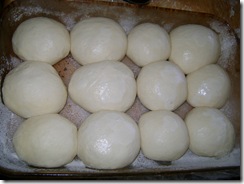 Steam the oven like crazy and bake 35-40 minutes at 460 (wow – that’s a hot oven).  I used a pan of boiling water, a pan of ice cubes, and sprayed the inside of the oven with water every 2 minutes for the first ten minutes of baking.

Remove from oven, turn out on rack, and wa-laah! 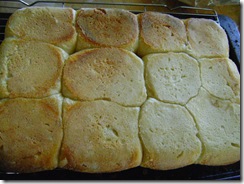 Oh, I forgot to mention I scored the buns with scissors as shown in B:ABB (p. 82). 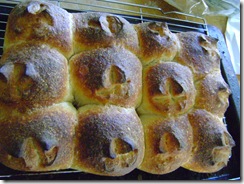 A little dark on top.  I was surprised they browned so quickly, because B:ABB assured me that recipes without sugar, oil, eggs, etc., can take higher heat for longer without browning overly much.

We haven’t eaten these yet, so I’ll report back on the true test later on!

Postscript!  They were delicious!

Very well-received, but I don’t know if I’d describe them as exceptional.  The outside was very nice and crispy (yay, steam!) and the inside had a tactile chewiness that I really enjoyed.

Flavour?  Hmm… not as much as a sourdough.  A nice, French bready taste, I guess.  I am saving one for tomorrow so I can see how well it keeps.

Pictures!  (apologies for the weird colour in the first one. 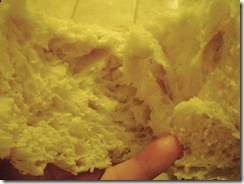 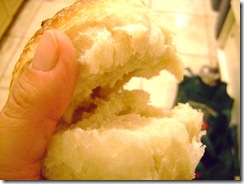 …Just delightful for soaking up veggie chili and sharing with family!