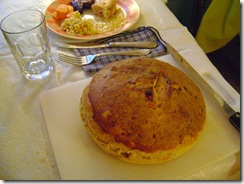 So I finally got around to making from scratch this amazing, yummy-looking potato bread, but once again (see my previous potato-bread attempt), things mysteriously went wrong along the way that can probably only be explained by one thing:  a Potato-Bread Curse.

First, I realized after I’d made up the dough (“hmm… seems surprisingly loose, even for no-knead bread”) that I’d used a 2/3 cup measure instead of a 1-cup measure.  Doh!  Even after adding a bunch more flour to compensate, the stuff was loose to the point of sticky, sticky, sticky.

Also, and this really is mysterious, I was super-distracted with the little kids, plus Elisheva was home sick today, so I basically chose a quantity of potatoes pretty much at random.  I roasted them with garlic, olive oil, a little salt and pepper.  When they were done, I mashed them and added the bread-water to them right away to cool them off.

The upshot of which was…“how much potato did you say to put in that bread, anyway?”  I have no clue how much potato was in there.  With the nonchalance of a Julia Child:  “Just toss some potatoes in there – never mind how many, just grab some!”

Needless to say, I suffered the consequences of these accumulated inexactitudes when trying to create an actual loaf from this stuff.

In its potato-bread recipe, Bread: A Baker's Book of Techniques and Recipes (B:ABB) warns that potatoes, even roasted, will add a whole bunch of extra moisture to your dough.  Sure enough, they did just that.

I could not even keep my hands floured enough to toss the thing into a basic boule shape.  However, eventually, I prevailed.  Yes, my hands were sticky and leprous by the time I was done.  But a loaf was formed, in a nice wide pan so it wouldn’t do the smurf-house muffin-shape thing, or, worse, overflow the pan and make a huge mess.

And… well, here’s what you’re waiting to hear.

I’m sorry, and truly deeply sorry, if you were looking for a moralistic, horrid, nasty-bread ending to the Story of the Potato Bread.  Because, in fact, we sat down at suppertime to a lively, crusty, delicious-tasting loaf: 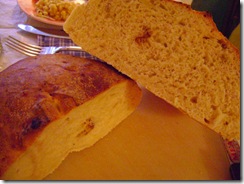 (only slightly underbaked because of all that darn extra moisture!)

I used small organic yellow potatoes, and roasted them instead of boiling.  I also – because they were organic, so I could! – kept the skins on, as B:ABB advises.  Because bits and pieces really are lovely in breads, aren’t they? 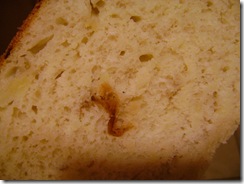 And you know what?  Nobody could identify what the mystery pieces were in the bread!

One child jokingly referred to them as slugs, but they added a sweet savouriness  much more reminiscent of caramelized onion than of pasty potato-ness.

So, all in all, another tasty, successful loaf.  I wouldn’t say mind-blowing, but certainly well on the way.  With a little practice, and maybe next time, a measuring cup or two.