From a few weeks ago:

I did it!  After four attempts, today’s bread was a SOURDOUGH SUCCESS.   I feel like I have successfully scaled Mount Sourdough. 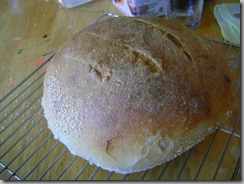 Here is the outside of the loaf, which I made based on the recipe here (scroll down to find recipe and technique).  There seem to be two schools of sourdough thought:  the uptight “do it exactly right or you will screw up and your starter will DIE” school, and the more laid-back “it’s yeast… it wants to ferment; just step back and let it GO.”

So the recipe I used follows the second, mellow school and really made me feel at ease with the dough, including the tip (doh) that sourdough takes longer to rise than commercial-yeast-driven bread.  I never knew that!!!  Obvious, but true.

For once, we were eating fresh bread and it wasn’t Shabbos, so I took the liberty of snapping pictures of the Opening of the Bread. 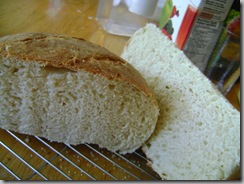 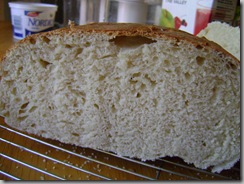 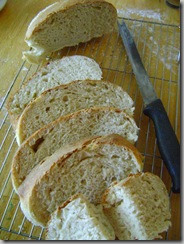 Look at those thick, yummy slices!

Elisheva was really worried that the bread would be literally sour.  I pointed out that she’d already had sourdough bread last Shabbos, but the truth is, it wasn’t very yeasty/tangy.

I have never really had plain sourdough before (without herbs etc masking the flavour) and it was a learning experience for me.  She said it tastes like Swiss cheese, and I think she’s right.  It is a yeasty, fermenty taste without being a bad taste, perhaps along the lines of Marmite, the thought of which makes me shudder.

I think there is a learning curve before I love it, to be honest.  To “real” sourdough people (afficonados?), regular bread has no flavour; flavour is what a really active, living yeast culture adds to the flour and water – without it, what you’ve got is basically wallpaper paste.

My other thought about the flavour was:  creamy.  The active yeast culture makes the dough taste creamy – yes, in a bit of a cheesy way, but also in a rich buttery way.  Which makes a bit of sense, considering that some cultures like their butter a little more – ahem – cultured than we do.  They actually prefer it to have a cheesy tang that would send most of us rushing to our grocery store’s Customer Service line to exchange it for a fresh one.

Oh, and this time, water-spraying did the trick of getting the crust extra-hard and crispy!  It didn’t do anything last Shabbos, which my mother said was because it was so humid that it probably was crisp and went soft the second I took it out of the oven.  This time, I sprayed it a whole lot every few minutes for the first 15 out of 30 total.  I also tossed a bunch of ice cubes onto a cookie sheet directly underneath the bread, just for good measure…

That has been my whole approach to eating kosher for a while, and I’m happy to be getting back to it:  if you can’t find it kosher, make it.  In the past, that has led to making dim sum, fresh pasta, sushi, Pad Thai and all sorts of curries and Indian sweets and flatbreads.

Sourdough’s just the newest arrival to the list, but I have been away from “artisan” cooking for a while… feels good to be back.