No corn syrup? Make your own with only 3 ingredients! 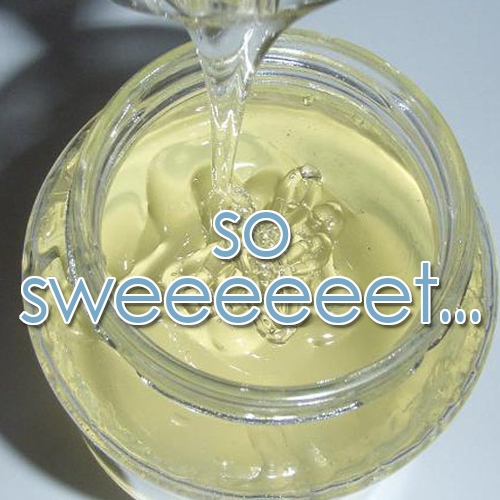 One of the basic baking ingredients that’s particularly tough to come by in Israel is corn syrup.

And some Fridays, it seems like every single recipe I want to try – whether it’s pecan pie (or the pecan bars I made today!), peanut brittle, or something else – relies on a generous quantity of the stuff.  Corn syrup in a recipe isn’t just for flavour, so as most people have found, you usually can’t just substitute something else, like honey, maple syrup, or straight sugar.

Corn syrup does some kind of magic that I can’t explain and helps things thicken up and set, especially in candy making.  (If you know, feel free to explain it to me in the comments!)

But there is one thing you can substitute:  INVERT SUGAR.

Invert sugar is a sugar-water syrup that’s been boiled to 236°F (114°C) and then cooled off slightly.  At that temperature, the sugar turns… well, magical.  Again, explain it to me in the comments.  But essentially – it turns into corn syrup.  Light corn syrup, and it’s true that it doesn’t have that strong “corn syrup” flavour that I love.  But it will turn out beautiful recipes, especially if you beef up the flavour a little bit with real vanilla or rum.

Now… one of the ingredients is cream of tartar, which can ALSO be hard to come by here in Israel.  But because it’s cheap and keeps for years (maybe forever), chances are you either have some or know somebody nearby who does.  Certainly, in most recipes, it’s a better bet than running out and paying way too much for expensive imported corn syrup.

You will need a thermometer.  Some sites explain how to do eyeball the sugar syrup, drizzle it into ice water, and so on.  But a thermometer is not that tough an item to get ahold of for your kitchen.  Almost any thermometer will work as long as you can leave it in a pot of boiling sugar syrup.

Here’s a thermometer I got not long ago from Aliexpress.  Look for “spatula thermometer” and you should find it.  The thermometer bit comes out of the spatula, so you can also just use it as an ordinary probe thermometer, for breads etc.

Anyway, this plus a pot is your sugar-boiling setup.  Here’s a picture of somebody with a better sugar-boiling setup than I do.  You can also get these “remote probe” thermometers on Aliexpress, but the one I got from there died too soon to be able to recommend it.  There are some great ones on Amazon, however, and the plus of a remote probe thermometer is they usually have a temperature alarm so you can set it to alert you when your sugar solution is nearing the right temperature.

So… are you ready?  Here it is, and as with so many recipes here, it’s barely even a recipe.

In a pinch, if you don’t have cream of tartar, the original recipe at his site says you can use citric acid)

If you keep extra invert sugar in the fridge, it will harden up.  Reheat gently over warm water well before using (for example, if you store it in a glass jar in the fridge, you can just set this in hot water to re-liquefy the syrup).