Sunny Side Up Rice: Weekday Asian skillet fried rice for one (pareve) 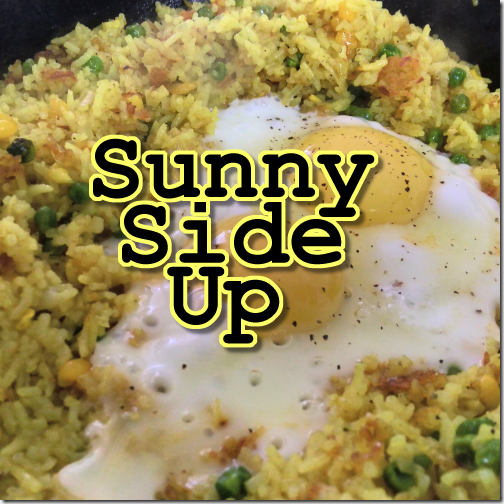 Need a little something to bring an ordinary weekday over to the sunny side?

Here’s a way to elevate rice from a humble side dish to a glorious main course for one person, perfect for weekday lunch or light supper?  I don't usually talk about cooking for one, for the obvious reason that I live with several other people.  But when the kids are off at school all day, sometimes I want to invest a few minutes into making something truly delicious that’s just for me.

There aren't many foods as simple and comforting as rice, and though this fried rice dish has a number of steps, it's simple enough to prepare in the background while I’m working, and the end result is flavourful and incredibly comforting.  There are two possible variations -- "Indian" and "Chinese" (I'm using quotation marks because I don't want to pretend that these are authentic flavours...) that are equally simple to prepare.

This is why I love working from home – I can’t stand sandwiches, and love hot, fresh, and comforting flavours.

For this recipe, I've used local Israeli ingredients, but feel free to experiment with whatever you have around.  It’s as flexible as you are! 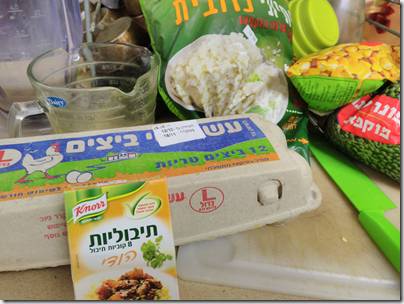 (it’s even vegan if you omit the eggs, since they’re kind of an afterthought anyway)

These Knorr flavouring cubes are amazingly helpful and can perk up almost anything, from plain old veggies to… well, stir-fried rice. 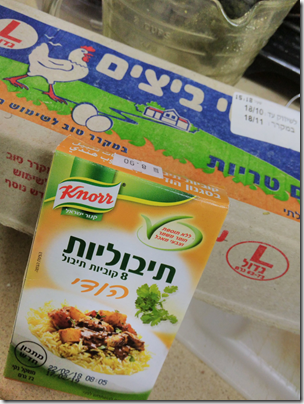 These are the “Indian” (הודי/hoe-dee) flavoured cubes.  They can be added to the water when you’re cooking rice, but here, we’re going to dissolve them in boiling water to make a sauce that will season the rice.

If you don’t have these cubes, you can use a local variety, or make a “Chinese” variation by mixing 2 Tbsp soy sauce and a little sesame oil (to taste) with 1/2 c. of boiling water.

** NOTE:  I strongly (strongly!) recommend a cast-iron skillet.  Mine is by Lodge and I love it.  It moved to Israel with us and I use it for almost everything. They're not always cheap, and good ones can be hard to find in Israel.  (If you come across a used one, snap it up!  Since it's just one big piece of metal, it can be kashered easily at Pesach and then kept out for year-round use.)

Here’s the cauliflower I’m using.  It’s new here, being marketed as the “hot American trend”: a grain-free alternative to rice.  But hey, why NOT mix it with rice, for the absolute best of both worlds? 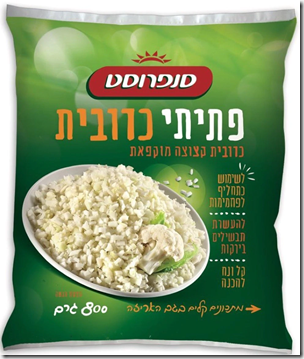 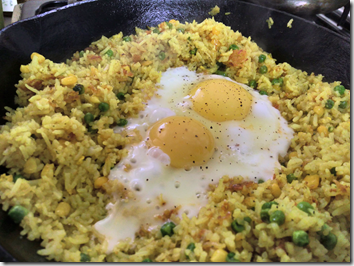 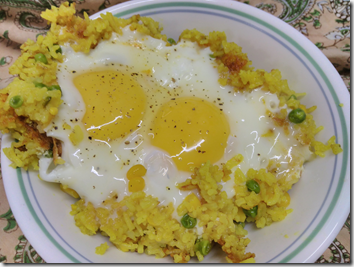 Now, just scoop rice into a bowl, then carefully top with the eggs, for a delicious and satisfying savoury feast for one in the middle of what started as an ordinary weekday.  (You’ll probably have leftovers, even if you take seconds.  This rice refrigerates really well and can be microwaved as a snack for hungry kids or husbands…!) 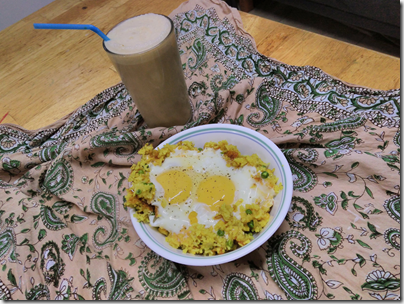 Who says a weekday lunch for one can’t be fancy???