Don’t know about you, but I was afraid of dough for a long time.  Afraid to let it touch anything, because it’s so darn sticky.  Afraid to let it rise uncovered, careful to set it on parchment or silicone when baking.  Careful that the challahs were spaced just so when I put them in the oven to bake, so they wouldn’t end up touching.  Careful, and afraid.

But just look at my challahs now!

Experience and a couple of good tools have changed all that… mainly the little bench scraper in the back, which I’ve raved about here before.  Also, a baking stone – preheated properly, it’s hot enough when you put the challahs in that nothing will stick to it.  Even if it does stick, a nudge with the scraper is enough to dislodge it.

Also, I oil the challah generously as I portion it, so that by the time I’m finished rolling out the “snakes,” the wooden tabletop is pretty much non-stick.  Not so much that the challahs slide around, or else it would be impossible to form them properly, but just enough that there’s no danger.  (I tell myself this is also good for the table.)

Because the challah strands are oiled, they’re less subject to evaporation and won’t dry out too quickly while they rise.  I also brush them generously with egg before baking, so hopefully, they’re still supple enough on the outside to allow for expansion.  (If they dry out enough that a skin forms, the outside of the bread will crack 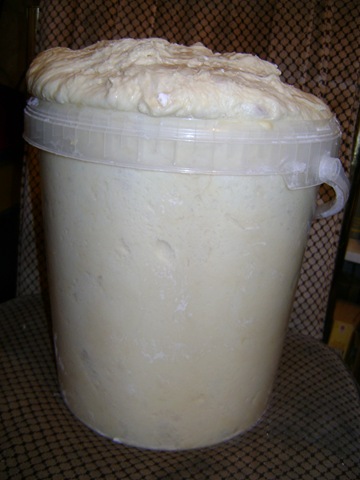 when the bread puffs up in the oven, leading to an unsightly “blowout” in an uncontrolled location, usually right above the bottom crust.  Ask me how I know this.)

I still use a lot of parchment paper and plastic and tinfoil and whatnot in my baking… but I am happy that another aspect of my challah-baking process has become both more masterful (cuz I’m unafraid!) and more eco-friendly.

Since I’ve ditched the plastic bags I used to rise the dough in for buckets, and reuse the buckets for challah storage, this means challah-baking has finally become a ZERO-WASTE process around here!

By the way, you don’t even have to waste water to clean dough buckets:  if you let them sit uncovered for a few hours between challah-making during the day and late at night after Shabbos dinner when the challah needs storage, then the small amount of dough in the bucket will dry onto the sides.  Just wipe it out firmly with a (cloth!) napkin and the bucket is ready to reuse.  (If flies are drawn to the challah bucket while it’s drying, drape a (cloth!) towel over the top.)

Hmmm… can you think of any other ways to bake eco-friendly?