I don’t know if this would be as much of a milestone in some families, but around here, your first challah is a big deal.

So it is with great pride that I announce that Gavriel Zev made his VERY FIRST CHALLAH!

I usually give him a choice, and he says no, or says he’ll just play with the “extra” piece (the small piece I separate for challah).

But yesterday, I insisted… and I gave him a full-sized blob of challah dough – 675g, enough to make a very respectable loaf.

He played with it, and pulled at it, and buried a knife in it (“that won’t be a nice surprise if Abba or somebody else bites into their challah and finds a knife!”), stuck his fist into it (“or if they find a boy attached to their challah!”).  And then he lost interest and decided to leave the table.

But I have been pushing him a bit lately with things like handwriting., and by goodness-knows-what instinct mamas have, I decided it was time to push him in this direction, too.

I said he could go down and play when he was finished making his challah.  And I asked him if he wanted me to cut it in three for him.  He said yes.  So I cut it in three parts, but then noticed there was a little left over, so I just stuck the leftover bit into the bottom of the pan.

And he rolled them into snakes, and the snakes were not very good.  They were soggy and floppy and uneven.  But I led his hands in braiding them and I think the end result was very nice. 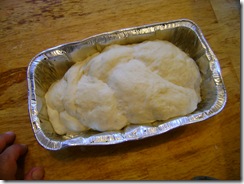 Here it is with Naomi Rivka’s.  She actually made this one entirely on her own – I didn’t have anything to do with it! 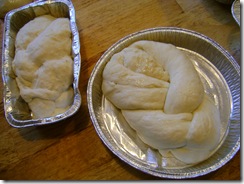 Our whole “family” of challahs! 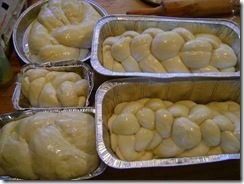 After this, Naomi Rivka actually had a first as well – she made this fabulously easy pareve brownie recipe, courtesy of Mrs. S. from Our Shiputzim, all by herself.

I brought the ingredients as she read them out to me, and she cracked the eggs and measured it all out herself (I was a bit nervous, because she reads 1 1/2 as “one-half” and vice versa sometimes).  I had to show her the 2/3 line on the measuring cup, but beyond that, she did great.

Okay, I glanced over at one point and saw her picking out bits of eggshell.  Fine – I do that sometimes, too (and wouldn’t you rather have a kid who picks out eggshell than one who doesn’t???).

She didn’t make the suggested frosting for the brownies – I was in a hurry (this was right before Shabbos), so I just mixed some coconut oil, cocoa and icing / confectioner’s sugar with half a packet of Starbucks instant coffee and a bit of chocolate almond milk.  It was actually a really nice frosting to top off delicious handmade-by-kid brownies.

As usual, I forgot to take a picture of either this brownie or Gavriel Zev’s landmark first challah coming out of the oven.  But he was proud enough of his challah (I topped it with some leftover streusel at his request) to ask that it be the one we make hamotzi on Friday night.  So delicious… the challah, and the nachas…