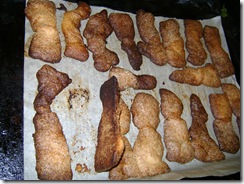 Decided to try another kichel recipe, this time Marcy Goldman’s, from A Treasury of Jewish Holiday Baking.  Being the cheapo that I am, I didn’t rush out and actually buy the book (like I’d love for you to do by clicking the links!), I just looked up the recipe I wanted online. 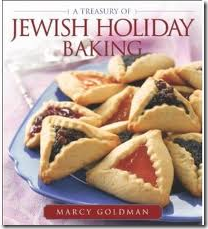 I found two almost-identical copies of the recipe here and here.

When using web recipes, I ALWAYS do due diligence and cross-check at least two versions for discrepancies.  It’s just too easy for a well-meaning blogger to make a mistake typing in a recipe, and it’s also easy for somebody to change around a couple of ingredients when posting their version of so-and-so’s winning recipe (and not say it’s been modified).

So I did that – I double-checked every single ingredient, then went ahead and made the cookies, and after great effort to roll and cut them (sticky!), popped them in the oven for 25-30 minutes as directed in this version.

Okay… I’ll admit it, I didn’t notice the lower number and put 30 minutes on the timer.  So there it was, and then I sat down to do parsha with the kiddies.

Thirty minutes later, the timer beeped, I leaped up, pulled out the cookies… and they were pretty much blackened husks of erstwhile deliciousness.

(Looking at the picture above, they actually look kind of palatable, but that’s an effect of the flash.  I assure you that they are indeed black as coal.)

When I sat down, indignant, to check the baking time (I thought it was too long!), I noticed that this version  of the recipe actually specifies “bake until lightly browned - this will take anywhere from 18-25 minutes, depending on your oven. Check for doneness after 18-20 minutes. Do not overbake - kichel will firm up once cooled.”

Indeed.  “Check for doneness after 18 minutes.”  Not “pull out incinerated husks after 30 minutes,” potentially 12 minutes longer than necessary.

Fortunately, there is still Batch #2.  Unfortunately, Batch #2, if it does turn out marvellously delicious, will not be enough to go around.  Fortunately, I’m still planning on making chocolate-chip banana cake.  Unfortunately, it’s very late on a Friday afternoon and I should probably get around to making the challah.

Fortunately, I love making challah, and it’s easy, and I’m good at it.  So there may be a happy ending to this story after all. 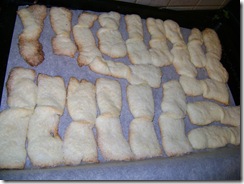 (postscript – I just pulled out Batch  #2 after 18 minutes, lightly golden-brown and ready to firm up once cooled… HOWEVER, I am also nibbling gingerly on a not-entirely-unpleasant refuge from Batch #1, which is indeed baked beyond its prime but still has a modicum of love and goodness stored deep in its crumbly heart… so maybe not a total write-off!)