A Large-ish Quantity of Dough

Besides a bunch of Auntie Sally’s challah which I whipped up before Rosh Hashanah and still had in the freezer, this is the main “overnight sponge challah” I’ve been playing around with this yom tov season.

Because the base recipe doesn’t make very much, I thought I’d quadruple it for the first days of Sukkos, when we were expecting lots of guests.  With the help of my trusty sourdough spreadsheet (which works even with NO sourdough, just by filling in “0g” of starter), here’s what I came up with for the sponge:

Here’s the wet stuff going into the bucket first.  With its happy new batteries, my scale held it all,  even though officially it only holds up to 2kg.  I was so happy I’d finally gotten around to marking the bucket weight on the side, just in case.  That way, if the scale goes out (or goes to sleep) while I’m measuring, I can weigh the thing, then subtract the bucket weight with a calculator.

(on previous occasions, prior to labelling the bucket, the process had involved screaming, then estimating based on the last number I’d glimpsed on the screen) 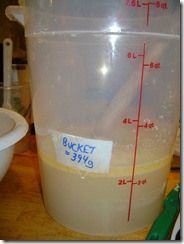 Now, in goes all the dry stuff.  I mix the flours together carefully, so I don’t have patches of one or the other – even if they’re similar, like all-purpose and bread. 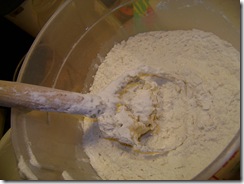 Not too many kneads later, the sponge: 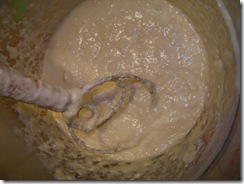 And now it sits and rises overnight: 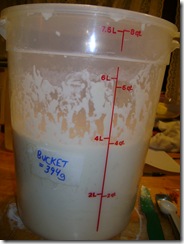 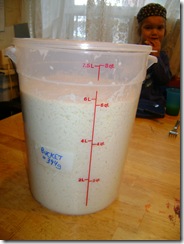 In the morning – easy!  No math!  Just mix in flour until you have a workable, soft dough.  Ted took this picture of me doing it a couple of weeks ago.  YES, I do it by hand.  It’s gloppy at first, but you know you’re nearly done when your hand comes out cleaner and cleaner and cleaner… 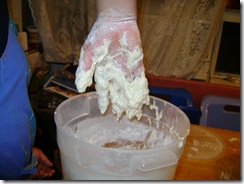 Finally, the whole blob comes out onto the table for some real kneading, about 10 minutes’ worth, depending on the size.

And then it rests in the bucket again – or buckets, as the case may be… this one used the bucket and a big bowl, and both opened themselves up after a couple of hours. 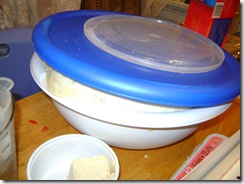 Take the thing out and fold it gently once or twice while it’s rising, if you’re so inclined.  (I was.) 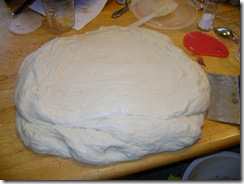 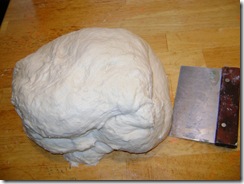 Here’s the finished dough.  Waah!  Too much!  But actually, it would turn out to be not enough; I was grateful for those “extra” two challahs in the freezer, because we used both of them up with all our guests over yom tov. 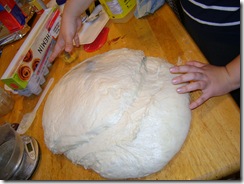 Divided it up into my standard 675-gram portions.  I had enough to make 8 p0rtions and a very generous 9th which I left in the bucket.  Fried in a cast-iron pan, the leftovers became 12 nice-sized “naan” flatbreads for our second day’s lunch.

Oh, also I made a bracha and separated a piece of challah.  I usually do it without a bracha, but for this quantity of flour, there was no doubt it needed one.

As usual, I rolled the blobs flat first, then rolled them up into these fat “grub” shapes.  (kind of like an open-ended bâtard, in classic French baking)  This is a Maggie Glezer technique that I think is supposed to make the dough “stronger.”  Dunno… but I like to do it before I roll them out, so I do. 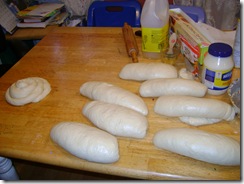 Roll each grub out to the length of the table.  I’m sure this is the REAL reason we have the custom of eating round challahs at this time of year – can you imagine braiding challahs for so many days of yom tov???  Round is easy!

(and for some reason, people are JUST as impressed by a super- easy snail challah as they are with a fancy braid – go figure) 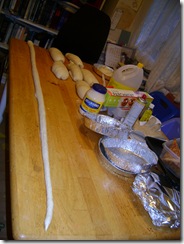 (like how everything on the table, mayonnaise, colouring supplies, spray oil, tinfoil pans, lapbook, etc., has been shoved to the other side to make room for the snake…?)

This year, I have learned that the secret to good round challahs is:  hold the loose end and wrap it around!!!  If you hold the centre and twist it around, though it may be easier, the challah will get too “high” and bunchy, like a turban, instead of a nice flat snail-shape.  Hard to describe, but if yours are coming out too high, try holding the other end as you wrap. 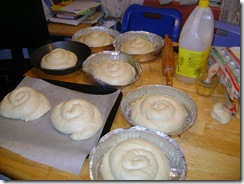 And here they are – if not perfect, very, very yummy indeed.  And true to form, not a single picture of a finished challah.  They were finished literally the minute before yom tov started.  And now they’re gone… so no pictures!