Recipe here if you’re curious, but truthfully, this wasn’t an outstanding bread… possibly because (mea culpa) my barley flour had actually expired.  That may explain the slight bitter taste that only I could detect, though that may just be an effect of barley in general.

What WAS nice was having my hands in a lump of dough again.  This dough was beautiful to work with; silky-smooth and damp, but not too damp.  The recipe made two beautiful bâtards, just enough for the family plus a bit left over.

Served with a nondescript soup, this was not my best bread meal ever… but definitely not the worst, by far. 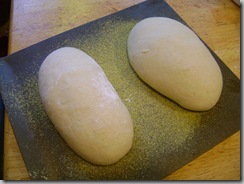 Slashed deeply, I thought, but not deeply enough… 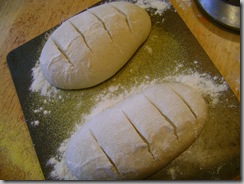 … to really open up during baking or… 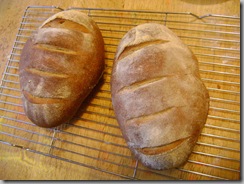 … to prevent a wee bit of a blowout out the side. 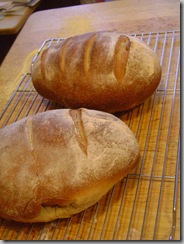 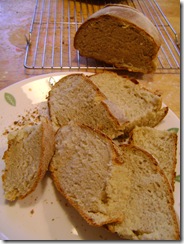 And it was quite nice with a bit of butter.  But then, what isn’t?

So why is it that warm weather seemingly gives me this compulsion to work with BREAD?  Shouldn’t I be at it more in the wintertime, when we’re allowed to lounge around indoors heating up the place and eating carby survival things???bar