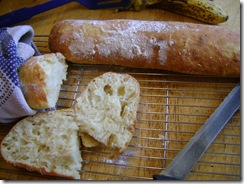 Probably my most  impromptu bread ever, partly because we were all out of flour.

You can’t see the nice yellowy tint of the bread, but it really is lovely.

This was actually the basic Artisan Bread in Five formula, doubled, which I made for pizza crusts last night.  I was going to substitute an equal volume of semolina to make up two cups.    But when the flour gave out, I added more than I had first intended to – there was EXACTLY enough to make the dough!

I also added 4 tbsp sugar and about 1/4 cup of olive oil total, reducing the amount of water accordingly.  Oh, and I reduced the yeast to 2 Tbsp (that probably doesn’t sound “reduced” but if you double it properly, you use 3 Tbsp, which I couldn’t conscience).  It was a bit slow to start rising, but eventually doubled  nicely in about 3 hours.

The pizzas were very nice, though with the oil, and probably too much sauce, the crusts were a bit soft.  After rising for about 10 hours yesterday, then refrigeration overnight, this was a VERY sloppy dough this morning when I went to make breakfast baguettes.

I’m very proud to say that I have fully overcome my fear of wet doughs and I persisted with this one, sprinkling with flour, turning and turning, until it developed some semblance of structure.  The one I sliced was a better baguette than the other, which ended up going a bit flat, ciabatta-style.  Probably still tasty, but it was the first one I made and I think I could have gone a few more rounds of tucking in to firm it up.  It was also brutally hard to transfer to the pan; the second one was firmer and therefore easier.

And here it is!  Wow, see how lovely and airy it looks…? 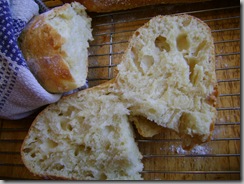 Mmm… forgot to take a picture with the butter on it, so you’ll have to visualize it.  I wish my camera didn’t take such “blue” looking pictures.  Or maybe it’s my monitor and the pictures look just fine.  Hope so!!!