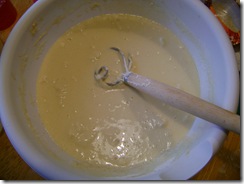 It wasn’t REALLY fifty kids, you understand:  just the SOUND of fifty kids, coming from my FOUR kids.  I think, actually, only THREE of them were home at the time.  It doesn’t really matter except to say:  it was a lot of noise.

And so as I threw together the challah (recipe here), I set the bowl on the scale and tossed in ingredients willy-nilly, here and there, glancing at the open recipe book which lay under a layer of crud and homeschool detritus on the table.

BUSY MAMA’S TIP FOR SUCCESS:  Clear the WHOLE table first, even if you think you’re only going to need half!

I was rushing a bit as I threw stuff in because my wonderful scale does have this way of turning off if it’s inactive for too long.  So you have to keep the ingredients coming, or at least, finish up one ingredient before it shuts down.  (cuz then you can let it turn off and it zeroes when it comes back on - just like taring it would do)

So I tossed in the water, oil, eggs, sugar, salt, and mixed them up with the lovely risen starter.  Such a lovely, nice, swishy mixture.  Then I dumped in all the flour… and ended up with SOUP.  Creamy, sloshy soup.  Huh?

This wasn’t even a situation where I could add another half-cup of flour or so to make it into a kneadable dough.  It was utterly and completely SOUP.  Bread soup.

I checked the flour quantity again on the scale;  exactly right, 400 grams.  Why did that number sound so familiar???

Oh, bloody hell.  That was exactly the amount of water I had added a few minutes earlier.

Scanning upwards in the recipe, I saw that the actual quantity of water I was supposed to have added was 60 grams… not 400.  I had added almost seven times more water than the recipe needed.  :-o

Which would have meant, if I wanted to salvage the dough, adding a bunch more eggs, sugar, salt, starter… not to mention 2400 more grams of bread flour.  I barely had another 400 in the bag.

Oh, and did I mention I used up almost all the starter in the first batch?

LUCKILY… (well, we’ll see), I have been reluctant to throw away the excess starter as I revived it this week, so I had a bunch sitting chilling in the fridge.

So I did the only thing possible, short of buying a Lenchner challah:  I started over.

Just before adding the flour, for the second time, I looked down at the swirly mess in the bowl and asked myself out loud:  “Did I put the oil in yet?”

Of course, I didn’t remember.  No clue.  There were dots of oil on top of the mixture, but that could have been from the previous batch.  And I had stirred it really well, so there wasn’t a single large pocket of oil, but that didn’t mean it wasn’t in there already; the yellow from the eggs made everything look yellowish and oily.

I think that was the wrong move, because the dough was quite moist, but at least it WAS dough, not soup.  I dumped it out and added another cup of flour during kneading to achieve the “clay” consistency Glezer calls for.

It’s resting now.  I’m giving it longer than the recipe’s 2 hours of bulk fermentation because the starter was cold when I added it, so I’ll probably form the challahs in an hour or so, and then stash them overnight in the fridge.

(at which point, they may fall apart due to sourdough overproofing… or something, but what else is new?)

I may really, really regret doing it this way, but for now, the dough is holding together and looking good.