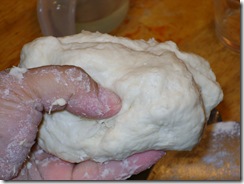 It was supposed to triple in 8-12 hours.  Mine did it in four, so I set in the fridge before I went to bed and took it out again this morning. 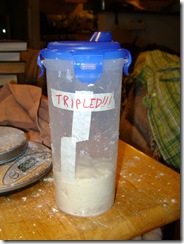 Waah-la!  Does that mean I’m bragging about my own sourdough’s super-rising power???  Let’s see how this challah comes out first.

The challah dough is in the background; sour starter in the foreground – TRIPLED, as you can see. 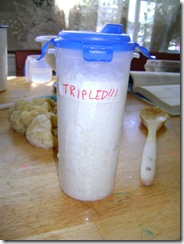 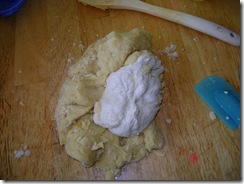 Begin to knead.  Begin to understand why most recipes ask you to break up the firm starter, not add it all in one blob.  This “marbling” effect takes ten minutes of concerted kneading to distribute more or less evenly throughout the dough.  Ouch. 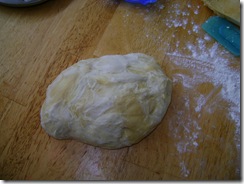 Partway there – still some marbling. Finally done – or at least, my arms can knead no longer. 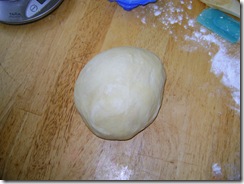 Left it sitting too long – it was only supposed to have two hours, but we went to the playground and by the time I came back, it was closer to four.

Formed the challahs as quickly as possible, since they ideally require a 5-hour rise. 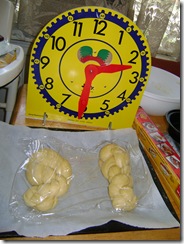 World’s ugliest two-braid, alongside a nearly acceptable one. 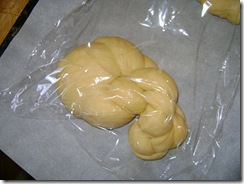 And now, we wait and let them rise.  I won’t be able to give them the whole five hours, because Shabbos is earlier this week.  But given the starter’s rising power (brag, brag, brag), perhaps I can cut that corner by just a little.

I baked them at around 5:30 – after a 3-hour rise.  I wasn’t sure if they had tripled in volume, as Glezer suggests, but a finger pressed in the fat part of the left challah left an indentation.  I didn’t know what that meant, but it was getting late and we needed the oven for other things. 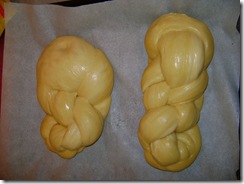 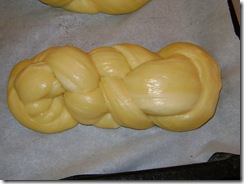 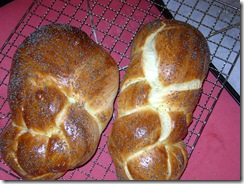 Looking forward to taste-testing these once again this Shabbos!