On Wednesday, I set about reviving a VERY old sourdough starter, and I am VERY pleased to report that the experiment was a success.

So I decided to jump right in with both feet and attempt, once again, to make Maggie Glezer’s sourdough challah.  Last time, they didn’t rise well and turned out dense and weird… let’s see how it goes this time.

Starter – last night, I took some of the revived starter and mixed it with some bread flour and water to make the quantity of starter required for the recipe.  It was actually below the level of the bottom line when first mixed (don’t you love these containers?!); I took this picture before bedtime, two hours later, and it had already puffed significantly. 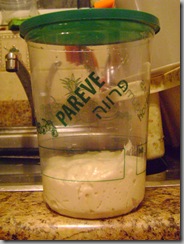 And by morning… here’s what it looked like!  An easy quadruple in volume, I’d say.  Pretty impressive for a starter many people would have thrown out. 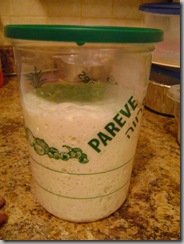 Here’s the finished dough, sitting, well, like a lump of dough.  She says in the recipe that it won’t rise much during its first ferment, and, indeed, the dough looked puny when I went to form it into two challahs. 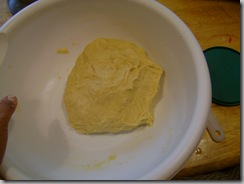 And here they are.  On the left is my standard easy 4-braid, and on the right, a Maggie Glezer-style 4-braid.  I made these with a friend watching, and she apparently makes this style of 6-braid on a regular basis.  I guess having a bread blog really does mean I don’t know everything there is to know about bread artistry.  (as if there was any doubt!) 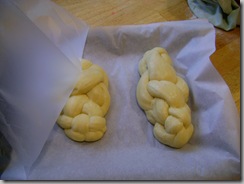 Meanwhile, in a panic this morning, I forgot that I’m taking Shabbos dinner – including challah – to people with a new(ish) baby.  Well, I don’t feel like running out to the bakery or even the grocery store for a Lenchner.  And I’m not about to bring them a puny OR experimental sourdough challah (I only experiment on family), so I whipped up my standard “Jennifer’s Reliable Challah” recipe, which I actually haven’t made in probably over six months.

Just out of the food processor: 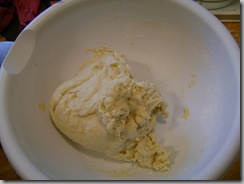 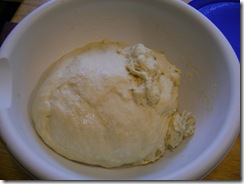 And here it is braided into two loaves, just over 1lb each: 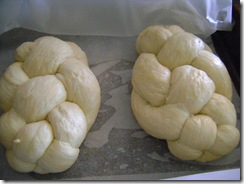 Like I posted once before, this quote on The Fresh Loaf (part of a list) definitely sums up what I’m feeling as I whip up these quickie challahs alongside the sourdough ones:

“You know you’re a true breadmaker when…you think making a 4 hour yeasted bread instead of using your starter is ‘cheating’.”