Well, I don’t really LIKE sandwich bread, and I don’t like whole-wheat bread particularly much.  But fresh, easy, no-knead sandwich bread?  This definitely looks like one to try for the future.

This week, I’ve taken out Jim Lahey’s “My Bread” from the library, and for our before-the-fast meal tomorrow, I’m making an easy lasagna, along with Lahey’s focaccia, which I will sprinkle with olive oil, rosemary and a bit of kosher salt.

I am intrigued by this recipe because instead of plain water, the recipe uses a boiled potato, puréed in the boiling water.  The potato is supposed to add moisture, I guess, and if you read this blog regularly, you’ll know I am unnaturally obsessed with the idea of mushing potatoes into bread. 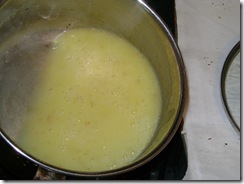 Now, I am forewarned:  this guy (oops – it’s a girl, or rather, a woman) had miserable failures the first few times he (oops - she) tried making this bread – to the extent that he (oops – she) had to throw out the PAN.  Okay, enough oopses!  SHE claims the potato starch made the thing adhere like glue, and now says this is not her favourite focaccia by far.

Hmm… so it might be a dismal failure.  But I’m still intrigued.  I’m also curious, when you’re weighing the water and potato and THEN boiling them together, how he knows exactly what the final weight will be?  I mean, some of the water must boil off, right?

That’s not much.  And indeed, the dough was very dry when I mixed it together – almost kneadable, which is not what I wanted from a no-knead dough.

So I “corrected” the ratio myself.  Lahey’s Pizza Bianca recipe, a couple of pages earlier in the book, uses a ratio of 350g of water to 400g of flour.  SO… if the focaccia uses 600g of flour, it seems one must multiply by 1.5 to obtain the appropriate quantity of water:  525g.  Since I only had 425g of potato/water, I added another 100g of plain water to make up the difference.

I hope that was the right thing to do.  It may not have been, given the well-known tendency of potato to release additional moisture INTO dough (which is why people use it).

So that’s yet another reason this whole experiment could turn out to be just a dismal failure.  Or a yum-delicious success story and a rave review!

The dough is rising now; let us wait and see.