The best bakey sale day ever!

Well, for me, anyway. 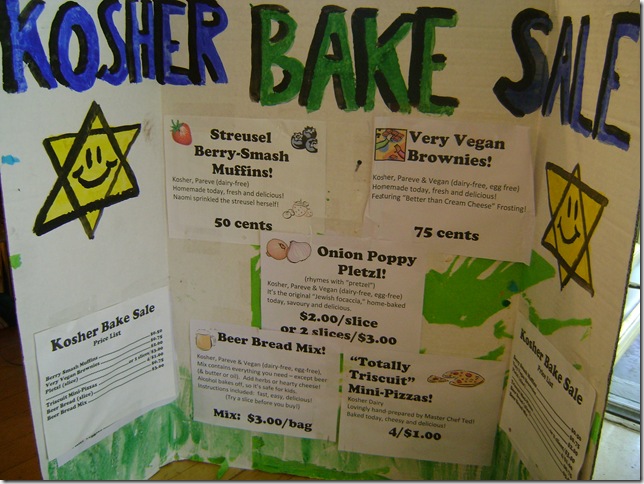 These signs just make me happy to look at, for some reason.  Maybe it’s Elisheva’s hand-painted magen david happy faces!

Absolutely the world’s BEST pletzl ever!  Here’s a picture of the two I made before baking; I took one with Ted’s camera, I think, afterwards.  They were golden and beautiful and rich and savoury and slightly sweet and ever so amazing.  I used the Artisan Bread in Five Minutes a Day Master Dough instead of any kind of enriched dough.  The only special thing I did was mix it on Thursday night so it had three days to retard in the fridge. 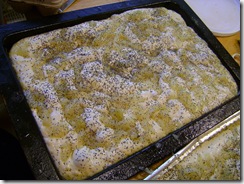 Muffins!  Blueberry, strawberry – both frozen because I didn’t have fresh-picked this time.  About three dozen, a giveaway at 50 cents each! 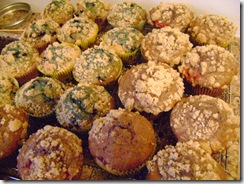 And the “Very Vegan” brownies, which are entirely virtuous until you whomp them with the Tofutti “Better than Cream Cheese” frosting.  Somebody was disappointed because the term “vegan” made them feel like it would be unprocessed and healthy in some other way.  Which is exactly the kind of assumption that annoys me… 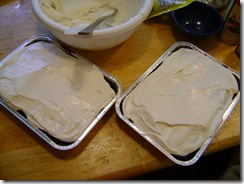 Anyway, it was a fun day, a sunny day, and I had a great time.  Looking forward to the final one of the summer, the last weekend in August!

p.s. favourite email after the event:  “your pretzel bread was DELICIOUS!”