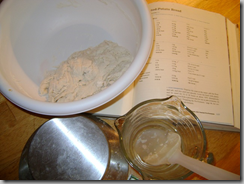 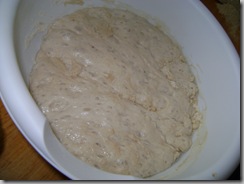 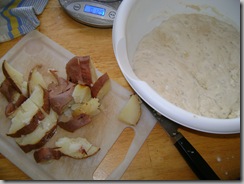 Knead well, until gluten is moderately developed (short of the shinier chewing-gum texture I’m learning is characteristic of highly-developed dough).  The finished dough (some crumbly finger-leftover-bits dropped on top): 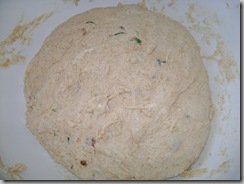 Fully-formed loaves, set to rise on parchment and cornmeal: 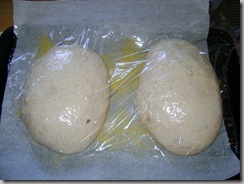 Fully-risen loaves, floured, then slashed (much neater than trying it without the flour!): 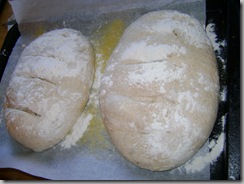 Would I make this bread again?  It WAS yummy, with a faint tang from the preferment and a bit of a rye taste, mysteriously, from the rosemary.

It was moist, but not extraordinarily so.  At Shabbos lunch, it may have tasted marginally fresher than a bread without all the extra moisture from the potato.  I was astonished that the potato itself totally vanished, even though I left the skin on and everything.

Was it worth doing all the extra steps, when I already have a perfectly good no-knead recipe that seems to yield more or less the same results?

Since this seems to be the week for challenging the no-knead phenomenon, that’s a very good question.

I certainly don’t remember the potato disappearing quite so completely with the other recipe… which makes sense, now that I think about it, because in this case, I mashed and kneaded it into the dough, by hand, at great length.  If you like the idea of spotting bits of potato in your loaf, try the other recipe, that’s for sure, because you won’t here.

I think I will likely try this again, adding a whole roasted head of garlic to give it a bit of zing.  Ideally, I should make the two recipes head to head and have a taste test.

It probably depends what you’re looking for.  I seem to remember the no-knead version being much airier; this bread is very dense, a lot like rye.  And this one is probably more complex in flavour, given the process that goes into creating it.

But is it ALL THAT?

Perhaps I’ll try the no-knead one again this week and report back when we have taste-tested.  If it’s good enough, I think I’ll probably stick with it and skip all these steps next time.