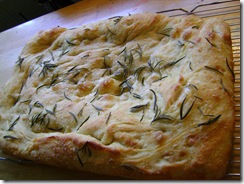 Hmm… the spell checker is telling me it should be “boccaccio” but I really don’t think that’s right.  What do spell checkers know about bread, anyway???

This rosemary-olive-oil focaccia is apparently swiped directly from “No Need to Knead” by Suzanne Dunaway, courtesy of this site. (phew!  now I can close the window that’s been sitting open all day)

It looked  slightly more impressive before I drenched it with too much olive oil and decided (dumb!!!) to gently “pour off” some of the oil.  The dough LOOKED like it was seated firmly in the pan, but of course, being a soft, wet dough on a well-oiled cornmealed pan, it basically sloshed off the pan, folded itself in half and chucked itself right back into the bowl.

Fortunately, I was able to unfold it all very quickly so all the cornmeal stayed on the bottom.  It was still drenched in olive oil, but most of it soaked in as it rested on the table after baking.

Will report back later with The Flavour of the Bread!!!