Too busy and too tired to post yesterday, but here’s what I made!

From starter-in-fridge to loaf-on-table in… I dunno, maybe eight hours?

Considering I’ve never made a loaf of sourdough that took less than two DAYS, pretty darn good.  And the actual hands-on time was not much at all.

I actually set out to make a super-easy one-step bread, only to discover that we were – eek! – fresh out of yeast!!!  So the only yeasts in the house were the wild ones chilling in the fridge.

I used the “easy sourdough” instructions from Prepared Pantry (though I baked it at a much higher temperature, like 460 instead of 350).

First, the sponge.  This called for one cup of starter, and I didn’t have that much of either of my white (non-rye) starters, so I combined them.  Preparing sponge time:  10 minutes at 9 a.m.. 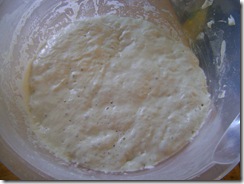 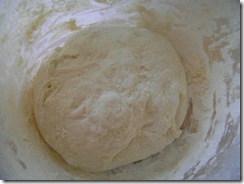 An hour and a half later, it had puffed up a bit; not much. 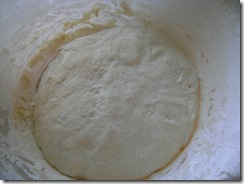 Poked a hole in it, just for fun! 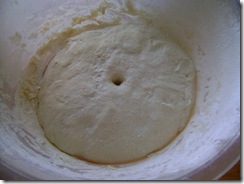 Form loaf, set on top of grits in oiled pan and left to rise, again for about an hour.  Loaf forming time:  2 minutes; lost track of what time I did it!

Left to rise for around another hour until it looked like this: 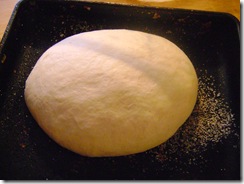 Slashed a little too vigourously / deeply using the “scissors” method from Bread:  A Bakers’ Book.  Steamed the oven furiously with one pan of hot tap water, one pan of ice cubes.  Popped the loaf in and sprayed every two minutes for the first ten. 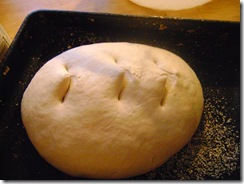 45 minutes later at 460 degrees (the temperature recommended for most of the breads in Bread:  A Bakers Book, which seems to work well in my oven) … waah-la!

Well, okay, it’s contorted and weird.  Looks a lot like Elisheva’s newly-dead guinea pig, actually, so we called it the Memorial Loaf. 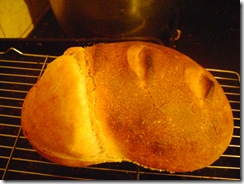 But look inside!  Yummy, delightful, holey bread.  Super-crispy on the outside (see the cracks in the crust from when it shrunk as it cooled?), nice and chewy inside.  Oh, and absolutely delicious flavour!  You could taste the sourdough, but it wasn’t too strong at all.  Even a bit of a “rye bread” taste, even though there wasn’t a grain of rye in it.  How odd. 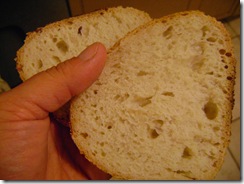 And so, SO fast.  Nobody in my family seemed impressed, but I sure as heck was.  YM reported a “beer” smell and flavour, but not in a bad way.  Nobody else said anything, so I guess it was a success on the family-pleasing count as well.