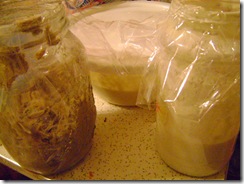 While I was been taking the last few weeks of Yamim Tovim to atone for various  sins of a spiritual nature (not that I am admitting to a single flaw!), I put my feeble and disheartening sourdough experiments on hold to focus on very basic Challahs That Work.

Yom Tov is over!

And I’m free – at last – to go back to experimentation.

I started with a library book, Bread: A Baker's Book of Techniques and Recipes (B:ABB), which seems aimed at pretty high-level bakers, but may also have a lot to offer the mid-level home baker.

The author, Jeffrey Hamelman, a dauntingly professional baker with over 30 years’ experience, offers several versions of each recipe (generally called formulas), including a US Imperial version, a Metric version… and also a scaled-down version for the home baker, which includes – with a spirit of resignation, but also without too much of the condescension I have seen elsewhere offers measuring-cup measurements for those of us who cheat and don’t weigh our ingredients.

There’s also, intriguingly, percentage formulas that professional bakers can use to scale the recipe up or down as much as they’d like to meet their own needs.  The percentages are cool because in a bread recipe, however-much flour the recipe needs is always called “100%.”  Then, all the other ingredients are shown as a proportion (by weight, not measuring cup!!!) of the flour.  So a given recipe may require 69% water – in other words, 20lb of flour will need 13.8lb of water.

In other words, highly technical, but a tasty glimpse into how professional bakers work.

I probably shouldn’t have been reading this over Shabbos, but anyway, I did.  Too late to stop myself now.

And after Shabbos, despite being laid up all day with sad, sick lungs, I hauled myself off the sofa to begin the threefold physical process of atonement, in the form of the three mixtures shown in the photo above.

First, a new RYE sourdough starter, from scratch.  This is straight out of the sourdough appendix of B:ABB.  I hope to keep it an all-rye starter, and it’s supposed to be a smooth paste.  Kind of lumpy and thick-looking to me; I may add more water the first time I feed it, tomorrow evening.

Second, revitalizing my neglected existing starter to make the Vermont Sourdough on Page 153 of B:ABB.  No, it’s not my new bread Bible, but it’s nice to have recipes that I don’t have to squint to make out on the computer monitor.  And it looks like a good, basic beginner’s sourdough.

Plus, it only calls for 2 tablespoons of actual mature liquid sourdough starter – TWO tablespoons!  That is then mixed with flour and water to create the “liquid-levain” which then starts the dough.  But all of the Internet recipes I’ve found called for half a cup or more of the mature starter.  Perhaps that’s why the breads have come out tasting overly cheesy and sour.

So!  With new hope, I hauled out of the fridge one container of the starter, which I fed with plain unbleached white flour and filtered water.  I will leave it overnight and feed it again in the morning.  When will I make the sourdough?  Maybe on Monday… or maybe on Tuesday.

Last, and most urgently, for tomorrow’s supper:  Pain Rustique, on Page 111 of B:ABB.  (confusingly enough, the book offers a recipe for Rustic Bread two pages later - does he think maybe we don’t understand French?)  Again, a simple recipe:  a poolish-based basic bread.

Poolish is a technique of “pre-fermenting” some of the flour, water and a tiny bit of commercial yeast.  It helps give the bread better taste and texture than if you just whomp the whole thing together the morning of.

Anyway, hopefully I’ll be able to bake it up tomorrow for YM’s birthday supper and actually remember to take some pictures to post here afterwards.  My mother made an absolutely great and memorable poolish-based rustic bread a couple of years ago and I just have not been able to get it out of my mind since.  I must make that bread!

Next up:  yes, another B:ABB project!  On Page 117, he offers a basic Roasted-Potato Bread recipe that looks easy, easy, easy.  I have been wanting to try another potato bread after the crazy weird one I made a few weeks ago turned out to be so absolutely delicious.  Should go even better now that I have an oven that works.

The big innovation with this potato bread recipe is that it calls for oven-roasted potatoes rather than boiled ones like most potato breads.  He also suggests leaving the skins on – the texture adds interest to the bread and if they’re organic, why the heck not?

All of which makes it sound easier than other recipes I’ve seen.  Though I may (if I’m lazy) abandon B:ABB for a moment and just use the Artisan Bread in Five Minutes a Day version, which I found here.

I would substitute roasted potato (what’s the difference between baked potato and roasted potato, if you leave it whole?), and also leave out the garlic.  Not that I don’t love garlic, but Hamelman points out (somewhere; I can’t find the page reference anymore) something along the lines that you should work hard to get a great-tasting bread recipe first before you go about sticking things in it that will invariably mask the fine flavour of the bread.

It’s easy to season up a mediocre bread, but what you want to work on is getting an extraordinary bread that doesn’t need seasoning.

Hamelman also points out, in his sourdough section, that “bad bread should be eaten warm, even hot.  The heat helps to mask the defects.  Good bread [on the other hand, and this is what I want to start making!] does not begin to taste like itself until it has had ample time to cool.  In fact, naturally leavened breads in general taste better a few or even several hours after they have cooled.” (p. 152)

SO… I am now thinking that some of my bread snobbery and refusal to eat hours-old bread (let alone day-old) has been perhaps due to bad bread.  Let’s try turning out some good ones and seeing how they last.

Most of the B:IBB recipes are more “patchke-dik” (Jewish for labour-intensive) than what I’m used to.  I don’t know how many corners I will cut and how many lengths I am prepared to go to for great bread.

I do have a life outside of bread.  And I doubt any sourdough is powerful enough to raise my family for me.  (get it?  a bread pun!)

But it sure is nice to be back on the Bread Wagon…that’s all I’m saying for now.