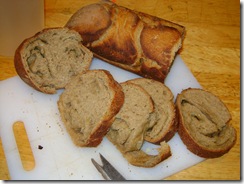 This is from last week… Tuesday?

I wanted to have a plain meal, with tinned comfort-food tomato soup and awesome bread.  And I had a dream, not a literal dream, but an in-my-head-so-close-I-can-almost-taste-it dream of a savoury RYE bread full of ONIONS.  No poppy seeds, not a pletzl.  FULL of onions, like almost to bursting.  And not just an ordinary loaf – a ROUND loaf.

Luckily, I had everything I needed just sitting around.  I modified this Sourdough Rye Bread recipe, using some sourdough but the full amount of yeast for the yeast version, and cutting the rising time by about ten hours.

While the dough was rising, I caramelized two regular supermarket yellow onions, using my no-fail, idiot-proof caramelization technique:  cast-iron skillet, little bit of oil, salt the onions, let them sweat until translucent, then just keep dumping water in and simmering on medium-low until the water was gone.  Repeat a few times, boiling water off each time, until onions look and smell delicious. 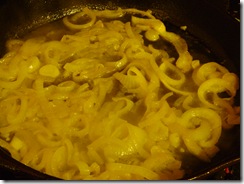 When the dough was as risen as I had time for (I got a late start – oops!  To my credit, I was at work all morning, not passed out in a casino.), I rolled it out flat on the table, without measuring or anything fiddly like that, and sprinkled the onions over top.  Probably should have cooled them first, but no visible harm done! 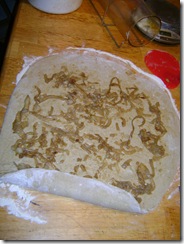 Rolled it up and SQUASHED it into the prepared Pyrex Bake A Round.  Despite the instructions to use only solid fat to grease the Bake A Round, I used PAM Spray, because it’s easier.  No pictures of how I stuffed this long floppy roll into a rigid glass tube, but it wasn’t funny, for a few seconds there.  I used wax paper and kind of finessed it a bit… then removed the wax paper, which I swear is the work of the devil.  (I can’t believe my mother used to bake cookies on it; does that mean we grew up eating wax???)

(note to self:  next time, make the rectangle skinnier and TALLER than pictured here, so it will roll up nice and fat to fill up the Bake A Round right away)

Anyway, I let it rise as long as I could, but it really only filled up the top part of the tube when I stuck it in the oven to bake.  One of the drawbacks of the Bake A Round is that I can’t get my thermometer into the middle of the loaf, just into one end or the other.  So far, these “end readings” haven’t let me down at all, though.

Here’s the loaf, just coming out of the oven.  Mmm…! 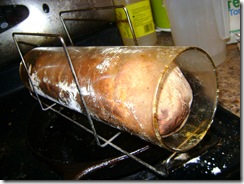 And just like last time, with a little prodding from a silicone splatula, it popped out of the tube beautifully! 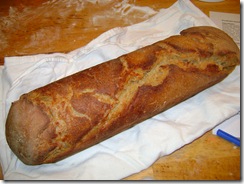 Let it cool a bit and… SLICE! 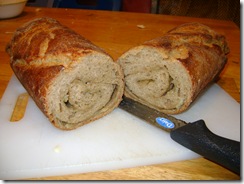 Apart from the tendency of all swirl loaves to fall apart a bit along the swirl, this was absolutely, 100%, the bread I had dreamed about.

Of course, this would work in any loaf pan, and I kind of feel bad because I have two beautiful new cast iron ones – Lodge, even! – that my sister bought me for my birthday.  I did use them for challah once and they were PERFECT… held heat, distributed it, released perfectly.  And they are lovely to look at as well.

I have many amazing breads in mind for you, little loaf pans, never you fear…

(Omg, did you know they have cast-iron cookbooks???  Oy, vey… and I need a new new hobby like a hole in the head!)

Anyway, life has been nutty here lately and I forgot to blog this but I saved the pictures and discovered them again tonight, so here you go.  Hope I’ve inspired you to go off and… in the spirit of Black History month, perhaps*, “have a dream” of your own.

* No trivialization of Black History month intended or implied, though frankly, I believe black people should be part of WORLD history and that’s how I’m teaching it to my children rather than having a special day or week or month.  Okay, I’m also teaching my children that there is no such thing as “black” people – we are all tinted in most of the shades of the rainbow except the more blue-purply shades, because Hashem likes every colour.  But I also realize that if you wanted to read my bizarre and half-baked opinions, you’d be over on my real blog instead of sitting here, drooling over my bread!!!